It is that time of year again, when the World goes dark, time zone by time zone, for 1 hour each. It's Earth Hour 2009. To participate all you have to do is shut off your lights, and preferably heaters, computers, and other electronic devices for just 1 hour, starting on March 28th, 2009 at 8:30pm your local time. This is a perfect opportunity to have a quiet evening with family or friends. Play games by candle light with your kids, or spend a romantic candlelit evening with that special someone. If there are clear skies where you live, it will propably be a perfect time to gaze into the heavens and see the beauty of the stars. If you live in a brightly lit city, it may be one of the few times, besides a power outage to see the stars.

By 2008 others around the world in 35 Countries and More than 400 Cities had joined in to the tune of 50 Million people. From Rome's Colosseum to the Sydney Opera House and even all the way to Antarctica, Normally floodlit icons of civilization went dark for Earth Hour in a worldwide campaign to highlight the threat of climate change.

"What's amazing is that it's transcending political boundaries and happening in places like China, Vietnam, Papua New Guinea," said Andy Ridley, executive director of Earth Hour. "It really seems to have resonated with anybody and everybody."

In the US alone over 36 Million People flipped the switch Off for Earth Hour in 2008.

Not quite everyone participates in the event, Ireland's more than 7,000 pubs elected not to take part in the 2008 Earth Hour. Partially because of the risk that Saturday night "revelers" (Nice word for Drunks) could end up smashing glasses, falling down stairs, or setting themselves on fire with candles. Well I guess drunk people, highly flammable beverages and Fire are never a good combination.

Google showed it's support for the 2008 Earth Hour by Blackening their normally white home page and telling visitors: "We've turned the lights out. Now it's your turn."

Earth Hour is a largely symbolic event, since it will have no Major effect on yearly energy usage, but the World Wide comrodery, and awareness it creates is a step in right direction toward a better World. I hope You will join us this year for an hour of darkness and tell your friends and family members to do the same.

I Hope You Enjoy Your Candle Lit and Quiet Evening with someone special.

You can find additional information and get signed up to participate, on the Earth Hour website: www.EarthHourUS.org

Every year I try to be part of it, turning off, winding down, unplugging for one hour. 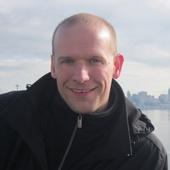 over 6 years ago
bookmark_borderbookmark
The Latest Credit Card Scam - From Your Own Credit...
View more Recent Posts   arrow_forwards