Theories abound on how and why we won World War II. I know the correct answer.

It was the ingenious use by the American farmer of a ubiquitous product named baling wire, commonly called "hay wire." This fine product was carefully hoarded and experimented with by millions of farmers all through the Depression, so at the beginning of the war, America had a truly formidible secret weapon.

This fine black wire was called hay wire because it was used in baling hay, but in actuality, it was the paperclip of the 1940's farmer. Anything could be fixed with hay wire, and usually was.

The rest is history: we patched up worn-out machinery, fed the world, and won the war. 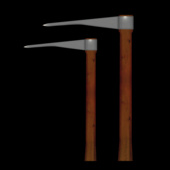 Noted Curmudgeons
Ask me a question