Like:
Home > Blogs > Juanita Thompson > Juanita's Blog on Life and Real Estate in Sumter, SC
The Carolina Cup in Camden, SC is one of the social events of the season around here. It's actually a full afternoon of horse racing at Springdale Race Course, and between the girls in their hats and sundresses and the guys in their shirts and ties and checkered pants, it's quite the fashion show.

The saying is, "It never rains on the Cup." And last Saturday, it didn't. It did, however, rain copiously before and drizzled a bit all day. It wasn't cold, which was a blessing -- last year it was cold and wet. A few years ago it was amazingly windy, so much so that we had to tie our canopies down to the vehicles. Others weren't so fortunate -- several canopies took to the air. Luckily none of them went hurtling across the race course, although there was a steady stream of plastic bags doing that.

Our group is headed up, more or less, by a retired Air Force Lieutenant Colonel I worked with at my last assignment in the service. He's been renting the same three infield parking spaces for about 20 years. We split the costs, he gets tickets at the reduced price, and the morning of the day we meet at his house for brunch, load up the vehicles with chairs and coolers and food (he provides barbecue, everybody brings something to supplement that, plus whatever they want to drink) and convoy to the race course.

This year the traffic was almost nil. That was a clue -- we were forecasted for nasty weather and apparently many people who usually go decided it wasn't worth the risk of getting wet. The worst of it was over by the time the first race had ended, however, and in the meantime we were treated to a steady parade of fashionably dressed and utterly soaked people, some of whom were wearing colorful galoshes (I'm not making fun, I was envious, they were smarter than me) with their sundresses.

The socializing is always worth the trip; most of those people I only see once a year so it's nice to catch up. We're located on the opposite side of the infield from the stands, on the backstretch, so we're not hanging out with the "rich folks" (those are the ones who get interviewed by the newspaper). We drank our Bloody Marys out of plastic cups and beer out of the bottles. No Waterford crystal for us!

I brought my new spiffy Flip Video camera with me, and have put together a couple of movies so far. The one that details the sheer joy of huddling under the canopies with a whole bunch of people while the skies drained on us has people's faces in it and I don't have their permission to show them, so here's the one I put together of the first race.

And a good time was had by all!
LIKE
Re-Blog
close 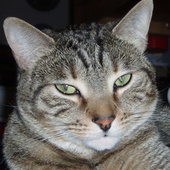