My IT guy is pure genies when it comes to computers...wish I knew a 1/1000 of what he does.  Since my computer knowledge on a scale of 1-10, I'm about a 2.  Needles to say Richard also has a lot of patience,

he would have to in order to help me while I'm leaning over his shoulder asking questions, while hes trying to fix my last screw up.  But he is always kind, and soft spoken and tells me it's OK to go into the administrative, settings of my computer, that's how I will learn.  He know he is close and can get to me quickly if I mess up too much. Richard also takes care of my Network and the 10 computers attached to if for my co. Liz Carter & Team Realty in Katy TX.

Bill told me about this Conficker worm and I thought it was an April Fools jock...no, no, no...it's the real deal.  I wanted to share some things I got from my IT Geek to explain, and let you know some things you can do to protect yourself, your business.  Since now days when the computer is down everything else is down, and no work seems to get done.  I stated selling home in Houston, Katy, TX in 1976, we were upset if our carbon paper was missing from a contact...no faxes, no cell phones, and certainly no Computer/ Internet.  I need to write a blog on how I sold real estate in Houston, and Katy Texas in prehistoric days

What does the Conficker worm do?

The Conficker worm has created secure infrastructure for cybercrime. The worm allows its creators to remotely install software on infected machines. What will that software do? We don’t know. Most likely the worm will be used to create a botnet that will be rented out to criminals who want to send SPAM, steal IDs and direct users to online scams and phishing sites.

The Conficker worm mostly spreads across networks. If it finds a vulnerable computer, it turns off the automatic backup service, deletes previous restore points, disables many security services, blocks access to a number of security web sites and opens infected machines to receive additional programs from the malware’s creator. The worm then tries to spread itself to other computers on the same network.

How does the worm infect a computer? MS08-067 to quietly install itself. Users who automatically receive updates from Microsoft are already protected from this. The worm also tries to spread by copying itself into shared folders on networks and by infecting USB devices such as memory sticks.

Who is at risk?

What to do if you are infected

If you are reading this page, your computer is probably not infected with Conficker as the worm blocks access to most security web sites.

If you have a computer that is infected, you will need to use an uninfected computer to download a specialized Conficker removal tool from. The tool is available here.

"Symantec is making the following software tool available on a complimentary basis to assist you." Now that my Hero Richard has come to my rescue again...tomorrow at Liz Carter & Team Realty in Katy TX will be a "normal" computer running, office full of folks who want to buy or sell Real Estate!  Or it could be an April Fools joke after all!  Either way I'm ready and hope this helps you too.

Now I just have to think of a great April Fools day prank to play on Brad, oh yes that would be fun!  Too bad I'm not closer or you would be in trouble Mr. Wonderful Brad.  L

Looking forward to hearing about the great April Fool's jokes.

Groups:
Diary of a Realtor
Family Ties
Houston Real Estate Professionals
It's all about them (ThemThem)
Texas Real Estate

Happy April Fools Day Liz. I hope the worm joke doesn't hit any of us

Liz:  Thanks for this great post.  Lots of knowledge about this crazy worm thingie.  I really am not very techie... so I hope that damn worm stays far away from me.  Thanks for sharing... hope you are well.  Take care...

Hi Liz, good to see you. Hope you are on the mend and cranking away at your listings.

Liz, It's GREAT to see you!!  I'm glad I can read what you wrote because that means I am NOT infected!!  Good advice to share.  My sister has her computer in to her IT guy right now and she could not access any websites.  It sounds like what she might have.  Luckily her laptop was not infected.

Howdy there Liz, my friend

Happy April Fools Day to ya. Hope you did not have too many pranks played on you today.

There Conficker worm is asken for new orders today. The news said there is a download at the Microsoft site, that can help folks. With that there thing.

This is quite a bit of detail about this worm.  I just heard about it yesterday.

Hey Girl! It is soooooooooooooooooooooo good to see you back again! I was lucky and dodged the bullet on this one as we also have a great IT person (who is also nice and speaks in a way that we can actually understand)! I hope this means you are making a comeback!

It's funny, I've got so many post I have planned to do and then something comes up, bla bla bla.  It's just getting back in the habit of putting time in my schedule to be on AR.  I was on so much for awhile I had not time for anything else, then of course my health issues, now I just need to plan my time and do it.  It's so easy to say

.  Kinda like it's so easy to give other people great advice.  I'll be by to see you my friend.  L

I've been doing some, not as much as I want to, but I'm starting to post more.  Hope you are having a fantastic 2009!  L

You are everywhere on the Internet, how in the world do you find the time?  You're looking great as always.  L

Hope you're still enjoying you son being home, what a relief it must have been when you first saw him.  We need to plan a contest for our Texas group, any ideas???

I'm with you, it's all Greek to me.  I turn it on and pray it works :).  Thanks to Richard most of the time it does.  Hope you are doing well, L

I never can think of a great April Fool joke till afterwards.  Was any on AR?  L 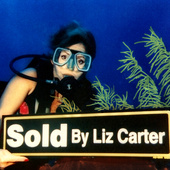