East Cooper Entrepreneurial Women (ECEW) is pleased to announce that Terry Haas, Charleston resident & featured real estate agent on HGTV's Design to Sell, will be the keynote speaker for the ECEW Network Luncheon at 11:30 a.m. on Tuesday, May 12, 2009, at Water's Edge Restaurant, Shem Creek, Mt. Pleasant, SC. To reserve your seat, register and pay online at www.ecewsc.com.

Most people know Terry for her recurring role on HGTV's hit show Designed to Sell. Now in her third season as one of the show's featured real estate agents, Terry shows millions of viewers how staging a home and making low-cost improvements can help to sell a property at top dollar. Honest and critical without being cruel, Terry shows how a making a small investment before the open house can bring a big return at closing.

Terry began her real estate career advising eager homebuyers in Atlanta. From the very start, Terry's heartwarming smile put her customers at ease, carefully guiding them through what can often be overwhelming process. Later, Terry served as regional project manager for one of the nation's premiere real estate companies, overseeing the sale of 3,000 homes in the Washington, D.C. metropolitan area and managing more than 120 employees. She is now a national keynote speaker, published feature writer for several publications and a well known television personality.

Now living in Charleston, S.C., Terry has her own home-staging consulting business. She offers clients insight into the ways they can transform their homes into stand-out properties in a very tight market.

Terry is proud to lend her celebrity and her time and talents to support a number of philanthropic projects. While in Washington, Terry was a member of the Giving Circle of Hope-an organization that promotes volunteerism and provides grant monies to various charities. Terry also was a lead volunteer with Project We Care, a group that collects supplies and distributes care packages to our troops overseas. Most recently, Terry helped raise funds for the Center for Women in Charleston, through the Family Circle Cup Tennis Tournament and the "It's In the Bag" Purse Auction

Terry lives on Daniel Island with her husband, Tim, and their son, Nicholas.

East Cooper Entrepreneurial Women (ECEW) was founded in 2007 to foster networking and professional development of women who live or work East of the Cooper. Since that time our membership has grown to over 150 business women representing all aspects of our business community.

ECEW Networking Women's Monthly Luncheon Series will feature successful business women of the Charleston Lowcountry that live and work in the Charleston area while their companies have gained national and international exposure. To learn more about ECEW, upcoming ECEW events, and to become a ECEW member, visit our website at www.ecewsc.com. 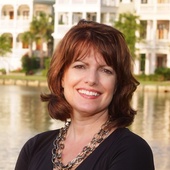 Devoted to sharing the best things about living in the Lowcountry. Helping people find their perfect home in the Charleston area. Sharing the secret why Charleston is a better way of living.