Take renowned golf architect Pete Dye and turn him loose on 200-plus acres of incredible beauty just south of Pistol River and what you have is a championship golf course that will probably look a little like Pebble Beach and a little like Bandon Dunes.

If everything goes the way the Crook Family is hoping, Curry County will have itself a 6,900-yard championship golf course that its developers hope will make it one of the best-rated courses in the country, if not the world.

The course will be situated on the west side of Highway 101. On the south it will border Boardman State Park and on the east Pistol River Dunes. If one is driving south on Highway 101 and drops down to the river and sea stacks coming down from Cape Sebastian and Myers Creek, the golf course would start approximately where the highway starts up the other side of the Pistol River delta. Much of the course will not be seen from the highway.

The course is being developed by Bill, Jackie, Ron, James, Melody, Kathleen, and David Crook. The Crook Family settled the area in the mid-1800s. They own some 2,800 acres near Pistol River.

The development is being spearheaded by Leroy Blodgett and his Eagle Two Development Corporation of Harbor, and Five Star Land Development of Scottsdale, AZ, the latter specializes in developing golf courses. They will be in charge of planning, permitting, and construction.

Perry Dye, the son of Peter Dye, and a principle of Dye Design of Denver, CO will be the principle designer. Steve Pfeiffer of the Perkins Coie law firm in Portland will be the land-use lawyer.

The golf course development will include 25-75 custom cabins, a clubhouse, and a restaurant. The cabins will only be accessible by golf carts. People's vehicles will remain at the clubhouse. Each cabin will have a full kitchen and a private hot tub. The cabins will have one to four bedrooms and range in square footage from approximately 1,000 square feet to 1,850. Some 95 percent of the golf course will be open space. No home development is planned for the golf course.

When completed, the golf course will employ 62 people permanently with an annual payroll of $1,750,000. The construction value for the golf course and all the buildings that come with it will be more than $20 million. More than 100 construction workers will be employed during the two-plus years of construction.

If everything goes smoothly, the golf course will open in June 2011. Before that happens the following must occur. The county Planning Services Department must propose a destination resort ordinance and map the resort areas of the county. (There is expected to be more than one.) This is expected to be completed by October 2009.

While the official construction start date would begin in June 2010, Blodgett said some of the planned fairways will be cleared early so that the Dye Design team can get a better idea of what they have to work with because of the hilly terrain.

Blodgett said the Crook Family wants to maintain the rural atmosphere of the county with lower green fees for locals at about $115 including a golf cart. The summer greens fees at Bandon Dunes tops off at about $250. Blodgett said it is hoped that the course will be limited to about 25,000 rounds a year.

The Crooks plan to use some of the profits from the course to create a foundation endowment or other mechanism to give back to the community through scholarships, grants, and donations.

Groups:
Fraiche Aire
No One Knows The Country Like We Do
United Country Rainers 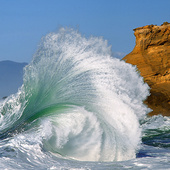 Everything you need to know about living on the Southern Oregon Coast! Whether buying or selling we are your one stop destination for results!