Ladner was created as a fishing village on the banks of the Fraser River. It is now part of the Municipality of Delta, British Columbia, Canada, and a suburb of Vancouver.

Named for one of the founding families, it developed as a center for farming and fishing. The ferry at Captain's Cove allowed for access across the river to Richmond, British Columbia. The George Massey Tunnel provided a permanent connection in 1959.

Paired together with its suburban neighbour to the south, Tsawwassen, these two communities make up the unofficial region known as "South Delta". 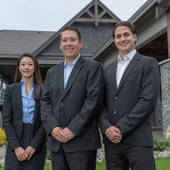