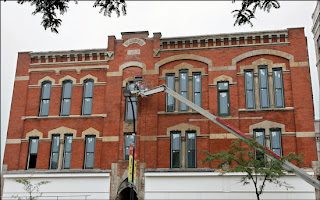 Building for use as cafe, offices across from Canal Park

A downtown Akron building whose last owner lost it to foreclosure after a failed attempt to sell it on eBay is getting new life under the eye of historic building renovator Tony Troppe. Plans call for the Kaiser Building, across from Canal Park on South Main Street, to have a cafe or store in two slots on the first floor, offices on the second floor and a mix of offices and loft apartments on the third floor.

''I did not like that vacancy across the street from the ballpark,'' said Troppe, who has renovated several historical buildings in downtown Akron. ''I felt for some time that a building of that stature should be brought back.'' Troppe said he wants to create ''a positive node of knowledge workers,'' referring to downtown workers and students who soon will be living at the 22 Exchange Place project a few hundred feet away. He believes they will be looking for places to hang out, eat and work.

The building, believed to have been built in 1877, formerly housed a German-American Family Club and had a grand ballroom on the third floor with 18-foot-high ceilings.

Troppe envisions a world-cafe type of eatery on part of the main floor, with coffee, beer, food and live music. He also wants to create an outdoor eating area on a brick patio to the side or possibly a drive-through window. Troppe said he is in discussions with potential tenants and might run the cafe on his own, similar to Mocha Maiden on Maiden Lane off East Market Street.

Troppe, with private investors under the name Kaiser Hall Revival Group, bought the building from the mortgage lender after a sheriff's sale for $365,000, according to public records. They have financed the project through Portage Community Bank.

The building's previous owner, Jeremy Caudill and his company, JJC Investors Inc., had purchased it in 2005 for $650,000. But Caudill was unable to renovate the building or sell it, including an unsuccessful listing on eBay, before losing it to foreclosure for delinquent taxes and back payments to the lender.

The building, at 323 and 325 S. Main St., needed a lot of internal demolition, Troppe said. Crews began in March, and Troppe hopes to have the first floor done and open for business by fall. FOR COMPLETE ARTICLE, CLICK HERE <-----

Show All Comments
David M. Childress
Howard Hanna Real Estate Services - Akron, OH
I would love to be your Realtor® in Akron Ohio!

Hi Sean, Tony's a friend of mine and a great friend to Akron Ohio. Can you imagine downtown Akron without his hard work and vision these last 10 years or so? Thanks for a great post.

What a farse that Troppe guy...he's a hot-head and everyone in town knows it.  Troppe gets tons of tax credits because of the historial value of these old run down properties.  I question how much he really cares about renovating Akron vs. renovating his wallet.