In the feature this past Friday New Normal: Workers Learn New Skills ABC introduced to the nation two gentlemen who I have been fortunate enough to come to know during the past year and hold in high regard. A small part of what these two have accomplished over the past year is to bring affordable, self-generated power to the world. The Windspire is the newest appliance for your home.

The Radarrange by Amana received the

Akin to Radarrange that was first introduced to households in 1967, I believe the Windspire will take it's spot in the top 10 Gadgets That Changed The World.

Latest statistics show that 25% of the world's population does not have power. This vertical axis wind turbine can have a huge affect on the lives in those areas of the world.

According to Global Issues 1.6 Billion people, one quarter of humanity, live without electricity. In Southeast Asia there are 706 million without electricity, 547 million in Sub-Saharan Africa, 224 million in East Asia, and 101 million in other areas of the world. The Windspire was designed and is being manufactured with these less fortunate in mind.

70% of the Windspire Wind Electric Appliances are planned for overseas installation, places where 2000 kilowatt hours per year will make a HUGE difference in a person's life.

This is the bigger part of what Mike Hess and John Holcomb are committed to. Back in the U.S., Mike Hess and John Holcomb are committed to jobs and local economies.

In a conversation with John, you will learn that he has found a way to make the Windspire better and less expensively than it can be done overseas. This makes the appliance affordable to the average homeowner or business owner.

These gentlemen are committed to increasing jobs in the United States.

Throughout the country, Windspires will be installed by local contractors using local subs. This will keep the dollars local.

John Holcomb says he is doing this,

The veterans have fought for the United States, many have given their lives for our country.

Through John's eyes...the Windspire is for memory and honor to our Veterans.

To hear more from Mike Hess and John Holcomb be sure to take 5 minutes to watch the ABC News 20/20 special:

**sidebar: the house in the 20/20 piece belongs to one of our happy homeowners, Gloria Noyce. Her windspire was installed by our own Devon O'Shea and his capable crew.  Gloria and her sister Janie are both proud owners of our systems. Although they were taped for the 20/20 special, unfortunately, only Gloria's Windspire and house made the cut!

Here's a photo of the girls filming! From left to right: sisters Linda, Gloria and Janie.

It was a fun filled day!

When new technologies are approached and accepted we suddenly realize how foolish we were not to embrace it all sooner.

Yes Sabrina! So many of these technologies aren't so new...just improved! I'm anxious to see them embraced! 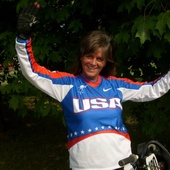