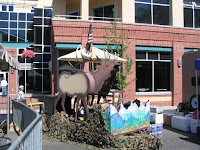 4TH OF JULY in a small town - there's nothing like it. An outdoor breakfast in Rotary Park, arts and crafts in Buckley Park, patriotic readings on Main Avenue, and a KCBS sanctioned BBQ Cookoff; downtown was packed.

The BBQ cookoff, sponsored by the Kiwanis as a fundraiser for the Boys & Girls Clubs, drew 29 cooking teams from as far away as Florida. These were some of the guys you see on the Food Network specials. We spent 2 days preparing and serving chicken, ribs, pork shoulder and brisket to the public and judges. Our team raised over $3,200 for the area clubs.

The celebration was completed by a terrific parade lead by the Westwind Piper Band. Uncle Sam, Clydedales, Freemasons, Harleys and the Ladies and Gents of the Historical Society rounded out the spectacle that ended with a brilliant fireworks display.

Oh, by the way - we placed 6th in Pork Shoulder and 2nd in Brisket. Now THAT'S COOL!

Stay up to date with happenings in Durango and all of La Plata County, Colorado.