Boris was a part of our family from shortly after DH and I said I do.  Found on a local tennis court on Halloween by my husband the tennis player Boris came into our lives almost 19 years ago.  He was such a loving and cuddly kitten, always nuzzling us under our chin and loving up against our arms.  Just a few days later the whelps told us not only did we have a new pet, but we also had ring worm.

That was life with Boris.  From the moment he entered our home he was fascinated and frightened by the great outdoors.  He would make a run for it and once out the door he was completely frantic, so the search through the shrubs and sending back into the house.  Then he learned a new trick.  Hiding.  Our favorite was when we had tickets for a show 100 miles away and no cat to be found.  After completely changing our plans for the day we found him, safe and sound behind the washer; we just barely made the show, much less doing anything else.

Over 18 years I could write a lot of stories, how he really disliked most dogs, how he would ride downstairs on the back of our persnickety cocker spaniel, how he hated other cats even more, how he hid from anyone who wasn't in the house the first day we found him.  The very long ride from Richmond to Myrtle Beach wasn't helped much by the medication provided by the vet.

Life with Boris was usually pretty quiet, an ocaisional run in with the dogs, then he started to mellow after about age 14.  He came to an understanding with the dogs, you leave me alone and I won't scar you for life.

As he grew older and started to have minor problems we just made him as comfortable as possible, special foods, slip covers and towels on all the chairs and special spots, whatever the old guy needed.

Then earlier this summer, something wasn't right.  He had become more social as he grew older, but his gait was a little off.  By the time the vet saw him it was much worse, Boris had had a stroke.  Of all the things I worried about as he grew older, diabetes, his heart, cancer I never thought of stroke.

Luckily for me Bill was home for the weekend and was there with me as we said good bye to our old friend.

He seems to be a wonderful addition to your family! I am sorry for your loss! What a beautiful cat! I have one that looks just like him. His name is Boo Boo! You have some beautiful memories! Pets can become such a large part of our lives! I know he will be missed.

Wishing you the best!

Thanks Judy, I still will look over to his special chair beside my desk expecting to see him napping.

That was a cute cat you had there, Cherry. I know you miss him. 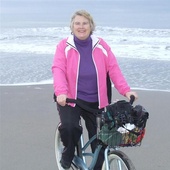