It's been a long time since I've written anything here.
So I'm going to ease in slowly and try to build up a head of steam again.   The 16-months have been months of tremendous change in my life but I'm back and hope to a regular read for you once again, if you'll have me.

So today, I thought I'd share the recipe that has been in big demand when I take a loaf of zucchini bread anywhere.  Because I planted several zucchini plants in my garden, and it's been a great growing season in Grand Rapids, I've had an abundance of zucchini to share, to eat, to bake into bread.  Here's a photo of the zucchini and zinnias (in the Z section of my garden)

The recipe comes from my Aunt Margaret, one of mom's two sisters who are still around to share great stories and recipes.  When I talked to her on my birthday a few weeks ago, and told her the story, she said that she believes that this one was originally my mom's. That made it even more special for me.

It's very easy, very tasty and when you see the ingredients, it has no great health benefit.. But it has a cup of zucchini per loaf, how can that be a bad thing?

So I offer it here for your taste buds.

Groups:
Nothing but the Positive 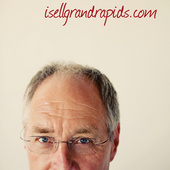 Welcome to my blog. I hope that the thoughts and observations I share will help visitors to look at real estate (and life) from a slightly different angle. Thanks for stopping by.