This is the schedule for the day at Real Estate BarCamp in Seattle at the Lake Union Armory on Tuesday, Sept 8th.  Real Estate BarCamp as an event that is happening in cities all over the country is often referred to as an "unconference."  At the one I helped organize and sponsor in Seattle we chose to have a keynote speaker, Ian Watt.  Then, as he spoke we decided on the break out sessions for the day from those who attended that wanted to participate.  If we had a topic that no one stepped up to speak about, then we'd start asking around for participants. We had about 450 attendees making it one of the largest Real Estate BarCamps in the country!

There were about 6 break out sessions each hour.  They were run informally with lots of discussion.  Topics included Facebook 101, Twitter, LinkedIn, Online Best Practices, SEO, Selling to Gen Y, and Google Yourself.

There were a couple dozen sponsors that made the event possible.  Even the lunch, nametags, and projection equipment was donated.  The even raised substantial funds for Solid Ground non profit to benefit the homeless from just donations.

OK... that is the basics ... My day was filled with networking with agents, lenders, title reps and others in the industry.  I came to the conference on my yacht with a number of others on the committee.  When we didn't have a projection screen for the speaker, I came to the rescue with my bedsheet from the boat!

The keynote speaker, Ian Watt, (google him!) is a top real estate salesperson in condos in Vancouver Canada.  He comes off as a regular guy with a captivating accent.  But, he is using his blog and the daily videos along with all kinds of digital tools to build his business.  He has learned to delegate. That is what I need to learn to do more of!

What I learned the most was that I could use video more on my blog.  I have started taping video interviews with real estate agents, brokers, lenders and title reps after my classes.  I have a YouTube.com channel called "clockhours."  So you may be one of the next people featured!

I run a real estate school for continuing ed in Washington State.  Check out my website/blog at www.clockhours.com.

Kim and I just wanted to Thank you for your help ! 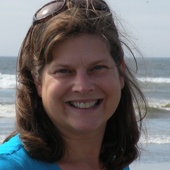