I'm often asked how it's possible that my real estate team's stayed together so long. My senior associate has been with me since the team's beginning, almost 7 years ago. Another joined almost 5 years ago, with the babies on the team soon celebrating the conclusion of Year 2. We've had one person come and go for personal reasons and an admin person move on, but the core selling team has remained strong and vital, even through this complicated selling year.

Meanwhile, other teams in my office -- mainly 2 people who decided to work together at some point --come and go after finding they aren't as well-matched as they thought.

One thing's for sure: I never take any of these people for granted. Some months ago, I was given the opportunity to spend a complimentary session with a $500-an-hour coach. He told me I was, basically, too kind to my team, that I should be making a lot more money and acting a lot less magnanimous. I thought about it afterward: Yes, I could have had a more profitable bottom line through the years, but I would not have experienced the loyalty, camaraderie, and support that have been the basis for our success.

And we have been successful, both as a team and individually -- most recently, as the #1 RE/MAX Team (dollar volume, 2008) in Essex County, NJ and #2 in the state. My senior associate, Tamima Friedman, was one of the most successful agents in our area last year, both in units and dollar volume.

One thing that  is absolutely imperative is that my team members get their due. Early on, I was struck by a colleague's different approach: When her team won an award, she always made her way to the stage alone. Now what's that about? On our team, it's all for one and one for all. We have had such a blast running up to the stage pumping our arms in Rocky-esque fashion. I mean, let's have a little fun with this!

In this new enviroment, the team has, I think, been a blessing to all of us on it. We can get together and buck each other up, remind each other of our victories and also laugh at the many wacky moments we've shared through this and years past. The most basic thing about our Team-ness is that we all like each other. Without that, we most certainly wouldn't be who we are -- The Baldwin Dream Team. Our dreams are inextricably tied together and we like it that way. Yay, team!

Groups:
All About NJ Real Estate
The Art Of Marketing You 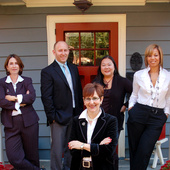