The velocity of money is a term used by economists to describe the speed at which money makes its way through our economy.  During boom times money moves quickly through the system as it's spurred on by consumer spending and investment, and in recessionary times it's velocity is diminished.

Why should you care?

Well, if you've been thinking about buying a home, then the "velocity of money" should be of concern to you.  The Federal Reserve uses interest rates to control the money supply flowing throughout the system; low rates=more money in the system, and higher rates=less money in the system.  In order to encourage borrowing, one tool that the Fed has is to lower the discount rate(the rate at which banks borrow money from the Fed).  The net result is more borrowing, subsequently contributing to an increase in the "velocity of money".

Historically speaking, this monetary strategy has been used to encourage the country out of a recessionary cycle.  However, over playing this card can be have unintended negative consequences.  In the 1970's the increased "velocity of money" netted a 13% increase in the money supply, and interest rates skyrocketed to as high as 20%!  Fast forward to 2009.  In the hopes of increasing the velocity of money the Federal Reserve has exponentially increased the supply of money compared to the net increase in the 70's; I've heard some estimates as high as a 100% increase in money supply over the past 14 months! Now I'm not an economist or financial guru; I'm simply taking a historical example, looking at what we're doing today, and extrapolating a possible end result.

In short, higher rates mean less buying power, higher mortgage payments, and more difficulty in securing financng.  So as you ponder whether to take the plunge or not, remember that the 'velocity of money"can put a real damper on you future plans.   :( 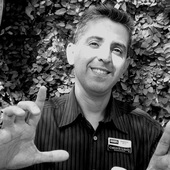