This chart shows the US unemployment rate for the last 30 years. It is good to look at a larger span of history since a cursory glance at year-over-year since 2000 would be scary. But looking at the "bigger picture," we see that we're actually in a normal cyclical pattern of job loss and jobs gained. Interestingly, the peaks for unemployment were 1983, 1993 and 2003...ever 10 years, on the money. We see dips in the unemployment (job gains) in between those horrible peaks. Now in 2009, we're seeing a peak coming that is earlier than the normal 10 year pattern. So, comments are welcome as to why that may be and where you think we're headed from here. However, knowing that there are dips and valleys and peaks and mountains gives us more of a broader paint brush stroke over the whole of U.S. unemployment. In the days of FDR, the government stepped in and created jobs for Americans. It's hard to say if that will happen again or if it really needs to happen, but what the government is doing is trying to help Americans stay in their homes by keeping the interest rates low, imposing 3 month moratoriums for possible refi/loan mods. It's one thing to lose your job. It's another thing to lose your job and your home. 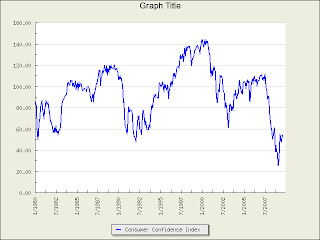 The chart above shows U.S. Consumer Confidence over the last 30 years. As you can see, we are now in a sharp dip, the lowest in the last 30 years. The latest results from the Conference Board Consumer Index shows that consumer confidence for the month of October is down from August and September. This looks like bad news heading into the Christmas shopping season. However, the reading for October is just under 50. To give you an idea of what that means...at the beginning of 2008, the reading showed 87.9. In the first and second quarters of 2007, the reading was well over 100. The whole YEAR of 2006 saw readings over 100 points. March of 2003 showed the lowest reading in recent history with 61.4 points. The year 2000 was the peak of consumer confidence...and I mean Mount Everest! Every month in 2000 was over 128 points with highs of 144.7 in January and May of 2000. We are now back down to early 1990 levels. 1991 and 1992 showed very, very low levels of confidence taking a dramatic drop in the middle of 1990 and not really recovering until 1994. The Consumer Confidence Index is a huge factor when evaluating our present economical situation. If Americans aren't spending, businesses suffer. When businesses suffer, American lose jobs. It's just that simple. We are presently in a "Death Valley" of consumer confidence - which makes perfect sense. The unemployment rate is through the roof, several of the homes sampled for this data were those of unemployed people or people who had lost their jobs, especially since people who tend to respond to long surveys usually are those who have a ton of time on their hands, like maybe they don't have a job. Needless to say, people who don't have a job aren't going crazy this Christmas. The economy will continue to see a slump and until the blood-letting is slowed down, we won't see a shift in the overall U.S. economy for some time. Is this a dismal outlook? Well, it's realistic, but I wouldn't say dismal. I believe that we'll see a slump that will last a few more years and then a rebound of consumer confidence that will hit the 90s and even into the 100 marks by 2012. We are seeing a wake up call for Americans. No more pulling equity out of your home to finance vacations and toys, no more pulling equity from a home that could possibly decrease in value in the future. No more getting buried in credit card debt to our shoulders. Americans will be more cautious in the future because many have learned their lesson the hard way. It's a bitter pill to swallow, but at least America will see a return to saving and conservatism financially. Maybe we'll see that 0.5% national rate for saved income go up to 5% or 10%. Maybe we'll see our country crawl and climb and scratch its way out of debt. Only time will tell.

I know that this information is true, that doesn't mean that I have to like it. Many people say that we need to hold our ground and wait for it to improve. Is that all we can do? I guess. I am not going down without a fight, I can tell you that much. No matter what the market is doing or can handle or however you want to put it, I am not giving up.  I believe in the theories of many professionals who have said that we are faced with a market very similar to the one we had in 2002-03. I am sure that we are going to be okay. So what if the market has gone back to the point it was before the big explosion of our economy. Maybe that is a good thing. thank you for your very extensive analysis. Very good writing.

Thank you for sharing a great and helpful article. I learn a lot from the Active Rain family.

All we can do is wait and see what really occurs.  It will be interesting.

I appreciate the feedback...you're right...it is what it is and we can't live in depression and gloom over our current situation...we need to rise up and fight and do what we can to prosper no matter the economic climate. 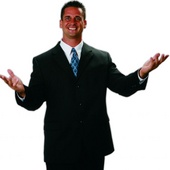