On November 17th, I’ll be presenting at the first ever Virtual REBarCamp, “The Real Estate Office of the Future” and there will be a number of ideas that I will be going over some of which I’ll be blogging about here and on Facebook and on ActiveRain while some content I’ll be reserving for the REBarCamp.  I’m really looking forward to this REBC especially because I think we are really are in a major shift that probably wouldn’t have taken place if the real estate markets had continued to plug along at a reasonable pace.  However as our eXp Realty Washington State Broker, Dale Kreiser has mentioned a couple of time, “This is the Perfect Storm.”

I titled this Blog Post, The Relevance and Future Demise of Bricks and Mortar and I believe that Bricks and Mortar in real estate especially is going to come under serious attack.  The primary reason as I’ll layout below is that it isn’t relevant anymore or its really becoming less relevant.  The second reason is one of money.  I do not by the way consider money the primary motivator for the demise however financial reasons will force the adoption of other methods of agent aggregation.

First why WAS Bricks and Mortar relevant?

The primarly reason was that was where the information on homes was kept.  Back since the Industrial Revolution and Automobiles and modern travel, the information on who’s home was for sale and how one could access it was controlled by brokers.  At the time, this was a very efficient model given other ways to gather information.  Everyone in town probably knew who the broker’s were and based on who they liked best they would give a broker a listing and that broker would shake the trees through his / her network of prospective purchasers and hopefully find a buyer.  I haven’t read the history of brokerages in general however if a broker or brokers had the listings that made it easier for buyers to access the listings and so they would travel from broker to broker to find a property.

Obviously the better brokers would need to have sub-brokers or agents to help them stay on top of all the listings.  Now the agents would obviously need to come to the office because that is where all the information on the listings existed.

As time went smaller brokers affiliated and shared information among themselves to compete with the bigger brokers and so the MLS came into existence.  The MLS really was printed pages circulated between brokers with an agreement to compensate each other if one of the member offices sold a property.

Eventually the MLS’s became more important then the brokers.  Now it was less about the brokers and more about being able to share information between the different firms because of the MLS, however in order for a consumer to access the MLS info they still needed to go into an office.  That is also where they kept, “The Book”.

The Book was really the MLS printout which was produced once or twice a month and was the bible of real estate.  The Book was protected like it was the Holy Grail and it really was because it insured that consumers needed to come into the office to meet with an agent to go and see property.  Seller’s had it a little better since it was their properties being listed the agents would come to them and really had no serious need to go to the office other then to complain to the broker or drink some coffee with their agent.

Now the 1990’s rolls around and things started to change.  By the late 1990’s there were public facing websites with some of the information that consumers could find in “The Book”.  Consumers started to use the web to search for properties however generally speaking information was a bit spotty.  There were no really good search sites and the Internet though recognized for its future importance was still a bit of a novelty for most.

Fast forward to the mid 2000’s.  Everything that was in The Book is now on The Web…  Consumers have quit stopping by real estate offices in the volume that they used to, they are now contacting agents on the web to ask questions.  They are finding great websites to search with better information then they could ever find in a real estate office.  Agents are now getting consumers leads to their Blackberry’s and iPhones.  The need to go into the office is losing its appeal and for many agents its more of a time waster.  Consumers are now coming up with their list of properties they want to look at and in many circumstances know a lot more about the homes they are interested, the zoning, the schools, the neighbors and the neighborhoods then the agents they are contacting.  By the way, I’m not saying the agents aren’t competent at all, what I am saying however is the web based agent has to cover a larger geography then the traditional old school agent and is really becoming more of a facilitator then the holder of the information or “The Book”.

Now if we look at the original reason why agents needed to work in a broker’s office the primary reason was because that was were the listings were and that is where consumers were conditioned to go to get access to the listings.

Today broker’s have a big challenge on their hands because they are forced to provide value to agents who really don’t get a lot of value from the brokerage bricks and mortar themselves.  Brokers are forced to cut sweet heart deals to agents for fear of losing the revenue associated with that agent but this is a major slippery slope because ultimately any deal cut for one agent makes it to all other agents who are working in that firm or prospective agents looking to join.  Now the broker is forced to do more with less and the agents know they can get more for less.  As much as a broker will attempt to differentiate based on their personal interaction with the agents, and that will work for a while, eventually agents will defect to where they can again get more for less and since the biggest commodity that the brokerage used to have and that was the listings and the customers walking through the doors on a regular basis went away because of the web, their relevance to the agent community at large is one of branding and not substance.

So where does that leave us.  The first major challenge is for agents and brokerages to recognize that the value is no longer in the listings.  Even though listings are important for branding and ultimately as a product to market and sell, they don’t mean a lot because of the MLS and the Internet.  The second major challenge is that consumers don’t say let’s go find ourselves a real estate office to find out what is for sale, so walk in traffic is at an all time low and going lower.  The market recently driven by the First Time Home Buyer tax credit will likely slow down again once the Government determines that it has done as much as it can to help stimulate the market and once again agents will be scrambling to take as much home from the transactions that generate and the traditional brokerages will be struggling with their overheads.

To put in perspective the cost of Bricks and Mortar runs between $2000 on the low side of the equation upward of $7,000 – $10,000 / year per agent.  If you don’t think broker/owners aren’t scared of what is going on in the economy, there is a reason why they are recruiting as aggressively as they are.

One more piece of puzzle relative to “Relevance”.

There has been value in the gathering of agents into an office whether daily or weekly, however the value has been one of Social Value.  This is really the nail in the coffin of Traditional Firms.  There is a major attempt by brokerages as a last ditch effort to stay relevant by talking about the value of an office, the value of being able to meet with the broker, the Sales Manager etc… and I agree these are valuable, however remember the late 1990’s when everyone recognized the future importance of the Internet.  Well we are all recognizing the importance of “Social Media” and in my opinion even more importantly, the importance of Immersive Social Web or what we are referring to internally as Web 3.0.

This really is the Shift that will ultimately change the landscape of real estate brokerages.  Whether it be the more superficial Twitter, Facebook, Flikr, Box.net, Google Wave, Orkut or any other number of quasi communication / marketing platforms, or what I consider the Virtual Office of the Future which duplicates the residual value of Bricks and Mortar in Virtual space, the landscape of work and how we do it is being forever changed.

The fact that I can blog on this site and in a matter of a few minutes to a few hours or days have 100’s if not 1000’s of prospective eyeballs read it and interact with me over this is nothing short of amazing and being able to do it from my Home Office which is quickly becoming command central for a multi-state real estate company is the future of our future as agents, brokers and owners.

The question is one of relevancy.  Is Bricks and Mortar relevant when an Immersive Web exists where you can interact from your home office in much the same way as you would in a physical Bricks and Mortar office?  Not everyone will engage in the immersive web today, but rest assured those in the late teenage years or early 20’s, those agents who will be moving into the workforce over the next 5, 10 and 15 years.  Those agents will naturally gravitate to an immersive experience.  That immersive experience will displace bricks and mortar.  Broker/Owners of traditional firms you are frogs in a pot of water that is getting warming and warmer all the time…  The problem is the frog dies before it knows its time to jump out.  Try as you might by the time you recognize that you need to change you are too weak to jump out of the pot.

Interested in more information on eXp Realty and where we think the future is headed, please feel free to email info@exprealty.com or call me, Glenn Sanford, Founder and CEO of eXp Realty @ 360-389-2426.

The demise of bricks and mortar has been increasing through the years.  Amazon.com has eliminated many smaller bookstores and is now seriously affecting Border's.  Many prescriptions can be ordered on-line thus decreasing the need for drug stores.  Most other consumer items can be purchased on-line, including cars, clothes, electronics, and even groceries.  So the trend in real estate is just following a path well-worn by other on-line retail and service providers.  Charlie Gantz, Greenwood, IN; J.D., M.B.A.; owner/principal broker, Atlas Commercial Real Estate, LLC

Hi Glen,  I'm going to disagree with you on this one.  Over the past several years so many posts/articles have been written about the demise of the traditional model and how some new model would put the others out of business.  In our area many of the new business model stores have already gone away or are having little traction.  I do agree that the traditional models have upgraded their technology, marketing and customer options to meet the needs of our market.  Technology allows many different models to co-exist but does not automatically mean the demise of any willing to adapt. 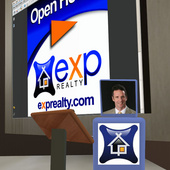