In the spring or summer 1707, John Noble, Sr., and his eight year old daughter, Sarah, made their way through the wilderness to New Milford. He built a fortified hut among the Native Americans at the foot of Fort Hill for them to live in while he worked on a house across the river where the town would be. The first house was erected in the town in 1707 or 1708. About 193 years later house on 64 West Street was built. It was redone in 1995-1997. Do you want to see it inside? 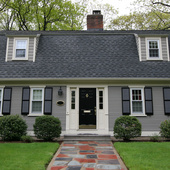