Well,  over a year ago i was placed on a roster to go to Iraq.  I spent several months training up getting ready to go, then was pulled off the roster last minute.  having just completed Real Estate school I decided that since I was taken off of the roster I would hurry up and jump right in.  I deposited all the money that was needed, found a Broker, and off I went starting my Real Estate career.  To much surprise on my first day in the office on my own I received a phone call from the Army telling me I was re-called to go to Iraq.

This time they was calling me up for a new job so I spent a month or so in Arizona training up some more on the new job.  Next I was off to Fort Benning, GA to prepare for mobilization, followed by a week in Kuwait for follow on training, and then finally my destination, Baghdad, Iraq.  I arrived in Baghdad in the beginning of March.  The temperature was still moderately close to home.  We was getting rain about once a week, and nothing about it seemed like a combat zone.

The accommodations were pretty nice.  We had a huge gym close by, good dining facilities, our offices were typical of what you would see in the states.  (Unfortunately I was stuck in an office this whole tour.  (My wife loved the fact that I was shoved on a desk this tour however it made for a REALLY long year.)  The living accommodations were nice too, we all lived in two man rooms.  Each room was part of a trailer that had three rooms total, lined up so that they looked like the picture below. We spent about two months there before we were told to move to Basra, Iraq.  For those not familiar Basra is the third biggest city in Iraq and right on the gulf and Kuwait border.  The area was owned by the British military just prior to arrival.  It was obvious that the Brit's did not intend on staying there as long as the Americans.  Most of the bases that is ran by the U.S. has been build up very nice with a solid perimeter, guard towers, and established security on the camp.  Basra was no where near this stable.  We pretty much had to build this base as we established ourselves.

The accomadations were less than adequate.  We had a small gym on post that could hold about 30 people.  We had a small store on post however it was always out of stock, it was about the size of a typical gas station convienience store.  There was no places to eat except the dining facility which was limited at the start due to lack of supply runs, and lastly, we were all moved back into tents.  The beds we were given were also "coffins" as the brits liked to call it.  They took the bunks, and put barriers all around them to protect them from mortars and rockets while they slept.  To be honest I liked that better than the Army's answer to jump at the sound of an alarm and run outside to a bunker. Anyway the year was pretty much un-eventful.  We had occasional incoming mortars and rockets.  The guys going out on missions occasionally hit an IED, however most are un-successful, and most importantly we allcame back with all of our personnel and body parts.

Around mid November we finally got the word on the date that we was to return.  December 8th was that lucky day for me.  I wasn't quite finished on that day but it was the first step.  I was able to get on that plane out of Iraq, and back into Kuwait.  I waited around a few days then was on another plane back to Atlanta GA.  Five days there and back home.  I was back in my living room as of last Friday and just as I promised everyone, I am home just in time for Christmas . . . (Barely).

Now it is time for me to get my Real Estate shoes back on and finally get started (again) for my new career in Real Estate.  In case no one noticed as well I finally did what I had been debating all year and changed companies.  Nothing against my old brokerage, I will miss working with them, but I decided to move on.

This morning I had my interview with Keller Williams and was extatic and the information I received.  I of course am still waiting on my license to get hung on the wall but it was one major step towards the rest of my career.

Thank you all for your support throughout this tour.  I feel that from the support here on Active Rain I am ready to head into the world of Real Estate.  The information I received this year from all of you has helped prepare me more than you could ever imagine.  I will continue to keep in touch and look forward to raining with you all even more as I begin my career.

Thank you and god bless.

Welcome home and thank you for your service! Good luck in your new career.

Congratulations Nicholas!  Welcome home... and thanks for serving our country!

Hi Nicholas... Welcome Home!  I know that I speak for many when I say that I appreciate the sacrifices you and your family made for our country!

Oh my...you're back!  I'm happy you're finally able to start your career in real estate now...good luck and glad you had a safe journey home :)

Nicholas, as promised, home in time for Christmas! I am sure your family is relieved, and your wife must be so happy happy happy! Good luck in your new career, and good choice on Keller Williams. Way to go! Now get to work and sell some houses, LOL.

Thank you for your service to this country. You, as the others, sacrifice so much for us. I don't know how to really thank someone for giving up all and giving all to the rest of us, it is a selfless act for sure.

Merry Christmas!!!! And have a wonderful, happy, healthy and successful 2010!

Nicholas - Glad to hear that you made it home safely. Thank you for your tour and your continued service to our country. May your career in real estate skyrocket. Merry Christmas and have a prosperous New Year.

WELCOME HOME!  And thank you for for your service.

Your attitude and willingness/desire to learn has you destined to be a success!

Merry Christmas to you and yours!  The world is at your feet ... make it count!

Welcome Home Nicholas, To be sure you just gave your family the only present they could want which is to be back safe and unharmed. Best of luck to you in your new career, and thank you for your service.

Welcome home, so glad you made it home for Christmas.

We so appreciate your service to our country. As a fellow Keller Williams agent welcome.

As an Army wife myself I've enjoyed following your posts.  My Donald served in Desert Storm and was discharged in winter of 2000.  I sort of had to stand between him and door for a couple of years to keep him from going back after 9-11, but I felt he'd done his part and our three children needed  him to finally be home for good.  So I certainly want YOU and your wife to know that I thank you so much and truly appreciate your service.  I look forward to your real estate career now being what you get to post to your blog about.  May God Bless you and yours too and have a very Merry Christmas at home.

Nicholas, I am so glad to hear that you are home safely!  It will be fun to read about your real estate career as that unfolds.

And thank you so much for your service to our country!

I wish you nothing but success in your real estate career. . .

and a very Merry Christmas!

Your family must be so thrilled to have you home. I can only imagine their joy.

Thank you Nicholas for your service and dedication.

I also want to thank your wife family for their part. It can't be easy with your loved one so far away and likely in danger.

God bless you all!

Welcome Home and Happy New Year, Nicholas!  Best of everything as you resume civilian life and start your real estate career.  My thoughts and prayers are with you.

I am so happy to hear you are back home safe and sound and ready to begin your career.  Wishing on of our nations heros all the very best!

Hi, Nicholas!  I'd love to know how your business is doing now that you're home!

Nichholas, thatnks for serving our country; are you going to family reunion? 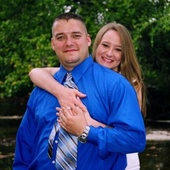