Today is Festivus, a special holiday from the show Sinefeld.
http://en.wikipedia.org/wiki/Festivus
History
Although the original Festivus took place in February 1966, as a celebration of the elder O'Keefe's first date with his future wife, Deborah,[2] it is now celebrated on December 23, as depicted on the December 18, 1997 Seinfeld episode "The Strike".

In the episode, although not in the original O'Keefe Family celebration, the tradition of Festivus begins with an aluminum pole. During Festivus, the pole is displayed unadorned

The celebration of Festivus begins with the "Airing of Grievances", which takes place immediately after the Festivus dinner has been served. It consists of lashing out at others and the world about how one has been disappointed in the past year. In "The Festivus Book" the tradition is watered down, and every household has its own version of the Airing of Grievances, with one family writing the grievances on the refrigerator in marker.

The Feats of Strength is the final tradition observed in the celebration of Festivus, celebrated immediately following (or in the case of "The Strike", during) the Festivus dinner. As described in the "Festivus Book", the head of the household selects one person at the Festivus celebration and challenges that person to a wrestling match.[8] The person may decline if they have something else to do, such as pull a double shift at work. Tradition states that Festivus is not over until the head of the household is pinned in a wrestling match. The Feats of Strength are mentioned twice in the episode before they actually take place. In both instances, no detail was given as to what had actually happened, but in both instances, George Costanza ran out of the show's portrayal of a New York coffee shop in a mad panic, implying he had bad experiences with the Feats of Strength in the past. What the Feats of Strength entailed was revealed at the very end of the episode, when it actually took place. Failing to pin the head of the household results in Festivus continuing until such requirement is met.

Another growing tradition, although not used by all celebrants of the holiday, is the phenomenon of the Festivus Miracle

In the O'Keefe tradition, the holiday would take place in response to family tension, "any time from December to May".[13] The phrase "a Festivus for the rest of us" also derived from an O'Keefe family event, the death of the elder O'Keefe's mothe

Groups:
Standing out from the "herd" -- Hobbs/Herder devotees
Diary of a Realtor

Tags:
holiday
festivus
george costanza
sinefield
festivus for the rest of us

Ahh yes a Festivus for the restovus.....Thanks for memory 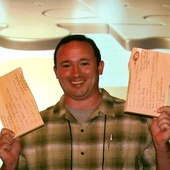