Wah Keeney Park in Evergreen has a variety of very interesting homes for sale.  Wah Keeney Park is one of the early neighborhoods in Evergreen history with some homes dating all the way back to the 1930's.  Wah keeney is easy to find-- it's located just south of Hiwan Golf Club and Stagecoach Road between Hiwan and El Pinal.  Skiers will recognize it as the community behind Paragon Sports while tennis players will see that it is just behind the tennis bubble!

In general homes in Wah Keeney are very reasonably priced and together with the adjacent El Pinal neighborhood represent the most affordable home options in North Evergreen.

There are a few bank owned homes in Wah Keeney.  I recently made a video of one for an out of town client so they could make an educated real estate decision on short notice without having to jump on an airplane!

Follow this link to find more information about Wah Keeney Park.  On the site I have extensive home search tools as well as analytic resources. 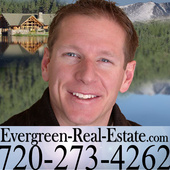 Evergreen real estate and Conifer real estate are my two primary areas of focus for the Activerain community. Here's where I write about various neighborhoods, subdivisions in Evergreen and Conifer and discuss various events and thoughts about this wonderful mountain community just west of Denver.