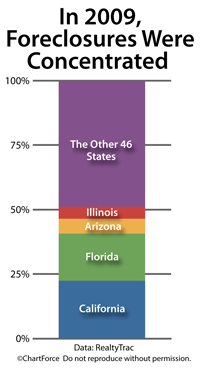 Like real estate, it appears that foreclosure activity is a local phenomenon, too.

As reported by RealtyTrac.com, more than half of all foreclosure-related activity in 2009 came from just 4 states:

More than 1.4 million filings made in 2009 are attributed to the above states. Furthermore, each ranks in the Top 10 for 2009 Foreclosures Per Capita.

The other states are Nevada, Utah, Georgia, Idaho, Michigan and Colorado.

Versus 2008, foreclosures are up 21 percent nationwide and that's a big number, but a deeper look at RealtyTrac's annual reports reveals a more positive undertone on the housing market.

Foreclosures are still prevalent, though, and buying homes in foreclosure in Northwest Indiana continues to be big business.  First-time buyers, move-up buyers, and real estate investors each are bidding aggressively.

Distressed homes account for one-third of home resale activity, according to an industry trade group.

That said, buying foreclosures can be tricky.

First, properties are often sold "as-is" and the cost of repairs may unwind the home's status as a "value buy".  Furthermore, a lender may require specific fixes to be made prior to closing and that, too, costs money.

Second, buying a foreclosed home in Indiana isn't as streamlined as buying a "normal" home. Closing on a foreclosure can be a 120-day process or longer. A 4-month time-frame may not fit your schedule.

And, third, finding foreclosures can be difficult. Despite the growth in foreclosure search engines, it still takes a good real estate agent to uncover the best homes at the best prices.

Read the complete foreclosure report and take a peek at RealtyTrac's foreclosure heat maps.  If you like what you see, talk to your real estate agent about what to do next.

Some interesting statistics. There is improvement in my area. Hope the trend continues in 2010. 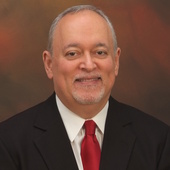