View  of S.W. Oklahoma City from the top of a radio tower Being a Ham (amateur) radio operator, I have learned that the hobby is much more popular than most people know.  In Oklahoma, there are many amateur radio stations and clubs that from time to time help out our state during disaster situations.  Used for enjoyment and sharing information also, the wireless communication has been traced back to the early 1900's.  The term "amateur" reflects the principle that amateur radio and its skilled operators are committed to helping communities without financial compensation; whereas commercial radio operates for profit.  The first club I joined was the EARS (Edmond Amateur Radio Society) in Edmond, Oklahoma.

I can remember several times in my short experience as a ham radio operator that cell phones did not always work for whatever reason, and ham radio was the only source of wireless public communication.   A lot of hospitals across the state have ham radios in position, with licensed radio operators on call for emergency situations.  The Salvation Army, and Red Cross also has volunteers that are licensed operators.  All you need for ham radio operation is a 12 volt power supply, a ham radio, and an antenna connected to the radio.  Antennas can be made using easily acquired and inexpensive materials. You can spend as much as you want on the hobby, or you can operate your own station for less than $200.  I have seen individuals study and get their license in less than 2 months. Ham radio has always been an effective method for storm tracking.  When thunderstorms build or threaten the state, ham radio links through strategically located repeaters that cover the entire state to monitor the storms as they pass through.   It has been used for search and rescue, to recruit volunteers, and to identify storm damage.  The art has proved itself through floods, tornadoes, and other natural, as well as man made disasters.

The Federal Communications Commission governs and protects the frequencies that ham radio is used on. Unlike Citizen Band radio, Ham radio can legally use much more power and it promotes good will toward men.  It can not be used for commercial advertisement or playing of music.  Call signs (station identification) must be spoken in the English language, and profanity is not allowed.  There are different levels of licensing of ham radio operators allowing different degrees of privileges.  Morris Code is one of the most affective and efficient forms of ham communication.  Signals can be transmitted across the world with very little power.  However, for some reason, Morris code has been pretty much phased out as a requirement for ham radio licensing and is quickly becoming art of the past.  At the time of my Generals license test, I was only required to copy and translate 7 words per minute.  I have heard some of the older and other proficient hams communicate at the rate of a normal conversation.

I could ramble about ham radio for hours.  There are many interesting things to know about the subject.  I have talked to other operators in Japan, Hawaii, Alaska, Italy, and some islands that I had never heard of.  I have logged pages of contacts from many places.  If you are interested in ham radio and would like to know more, please contact me.  I would be glad to help you in any way that I can.  Ham Radio is one of the few privileges we have that we don't have to pay monthly rates for air time to communicate with.  I have met many wonderful people that enjoy the hobby, and made lifelong friends that I would have never known had I never taken the steps to getting an FCC approved license.

What a neat postl  I have always been fascinated by Ham radios!

Featured in Everything Oklahoma. 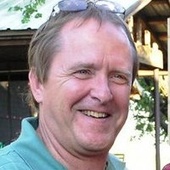