This is a great article.  It puts into perspective what can happen in Northern Pennsylvania and in the Southern Tier of New York State with the http://oilshalegas.com/marcellusshale.html. It wasn't farming that settled the American West.  It was mining.  The lure of wealth in the form of precious metals like gold (and later, silver) enticed men from the east to leave home and family and make their way west to California. They called 'em the '49ers.  The year was 1849, and  American football wouldn't be invented for another twenty years.

It had taken a year for the news of the California gold rush to make its way back east, and the result was a stampede of humanity.

If you're a real estate agent in the west, the roots of your livelihood can be traced to this particular event.  In the settled part of the American continent, ownership and transfer of real estate was orderly for the most part.  But that was back east.  And then came the California gold rush.

In an economy where a factory worker earned a dollar for a twelve-hour day, and a skilled craftsman earned half again that amount (a princely $1.50 per day) a prospector might take $25 or more out of a riverbed in California in a day.  That kind of money will change things quickly.

When news of gold at Sutter's Mill reached San Francisco in 1848, the town had a population of 850.  Prospectors began arriving by boat.  By December of 1849, San Francisco's population had swelled to 25,000.  Two years later it topped 36,000.  (Don't you wish you had real estate demand like that?!)

In the gold fields, mining towns sprang up helter skelter, often without benefit of law.  The names, some of which survive today, paint a picture of the risks associated with life in these primitive towns: Bloody Gulch, Gouge Eye, Hell's Delight and Hang Town.

The boom went bust.  Many prospectors came late to the California riverbeds, but after having travelled between 3,000 and 15,000 miles to get there, they weren't about to give up.  They struck out on their own, and the American southwest is cratered by mineshafts dug by hand by these hardy souls.

Real Estate values were subject to wild fluctuations 160 years ago just as they are now.  Remember San Francisco's population in 1848?  One historian puts the towns male population on May 12th (the day the news of Sutter's Mill reached town) at 600.  Three days later, only 200 men remained.  Houses were deserted, stores closed and according to one source, even the newspaper folded as no one was left to print or read it.

I expect that property values plummeted, only to rebound as prospectors by the thousands descended on the port city.  Someone made a lot of money in real estate!

There's a lesson to be learned for REALTORS and lenders alike.  Nothing is forever, and the winds of change that swept away fortunes will reverse themselves.  Make sure you have the right tools to take advantage of the gold rush to come.

Lorne Greene's ballad of the old miner is worth three minutes of your time.  Listen to the video before you comment.  I'm indebted to Bill Archambault for digging up "The Old Tin Cup."

Thanks for the reblog!  Much success to you today! 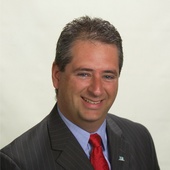