I reblog this post because, the photo is showing the difference to the untrained eye on termite damage. Great example of " earth to wood contact".

Think about how termites eat wood.

You get the picture.

They like to dine on all the softer grain of the wood leaving the harder layers to rot and decay from the moisture absorbing frass (that is poop to the lay person) packed in their excavations.

I was thinking about this the other day after inspecting a deck.  At some point the ability of the wood to support its own weight eventually must succumb to the decay/rot and ultimately to perhaps one last bite by the termite.

Now, install this piece of wood as the primary support for something like a deck and then it is perhaps the kegger at the buyer’s first house warming party that becomes the straw that breaks the camels back----or in this case the “deck’s back.”

This first picture show a support post with some obvious decay present toward the top.  Since 1978, the flat top of this wood has been able to absorb water that drips through the deck boards above.  This created conditions perfect for Dampwood Termites and Decay/Rot. One can see where two 2x10’s have been let-in to the post to create the carrying beam for the joists above.  This further creates a place to trap water and promote decay.  In order to determine how extensive the damage was I grabbed the decayed area and pulled at it with about as much force as it takes to open a car door----and not like you guys with doors frozen shut in the grip of winter.  This next picture shows clearly how much hidden damage there really is and how little support there actually is. Spontaneous collapse of this deck is a very real possibility-----and could result in a lot of spilled beer.

Hello Roy and those are some hungry termites, and it's nice seeing you around the rain!

Hi!  Great post...very graphic and informational...almost made me sick over my coffee this morning LOL!

The tricky thing is sometimes you cannot even see they are not only eating but have FINISHED eating the inside of the wooden member.  They hate light so they feed inside the piece of wood for cover and darkness. 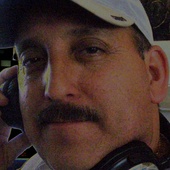