The snowstorm we had last night and this morning was a bit of a surprise for just about everyone I know.  The weathermen had been forecasting snow for a few days, but the closer we got to the weekend, the higher their chances got.

As of yesterday morning, I was certain we would see some of the white stuff, but you never really know how much you'll get or if it will even stick until it arrives.

I think the official measurement for Charleston was three inches, but I'm pretty sure we may have gotten around four.  We've had snow flurries and a couple of times where it stuck to the ground, but the last snow like this was twenty years ago in December 1989.

It was fun to wake up to such a serene and beautiful scene outside.  We were without power for most of the night, but we stayed nice and toasty under the covers!

Just about everything has melted on the ground now.  The high today is 45 and the sun is shining bright, so at least we don't have any shoveling to worry about :) We proudly serve and sell real estate in and around all of Charleston, SC.  If you are thinking about purchasing or selling your home in Charleston, Johns Island, James Island, Folly Beach, Kiawah Island, Seabrook Island, West Ashley, Mount Pleasant, Isle of Palms, Sullivans Island, North Charleston, Hanahan, Summerville, Goose Creek or other surrounding areas, and more importantly, want to work with a local area expert, contact us at your earliest convenience.

Jim and Maria, this was a surpise. But, the nice part about this snow is that there was a small accumulation, but enough to enjoy and build a snowman.  Like the family photo.

Beautiful pictures.  That is the storm that we are getting on Monday I bet!

We woke up to about 3 inches here in the Raleigh area. It was, as your pictures are, really quite beautiful.

Thankfully you and the family have photos to remember forever...because tomorrow it'll all be gone!

Hey guys, man this snow on the east coast area is really something. A client we are working with up in Ouray has 111 inches on the ground (up the road30 miles 8000 feet elevation). You guys must be freaking out.

That is one small snowman.  Great pictures of what is hopefully the end of all this snow.

Adorable..cute family and I love the dogs!  I think we always get more measurable snow than what they say!

It's wonderful to have the snow every now and then.  Looks like you might have had a little fun too!

If you ever want to enjoy more snow, come visit us in New Hampshire sometime!!!!!

In the fourth picture, I see two dogs. In the fifth picture, I only see one dog, and I know that you have a family of three, so I can only presume that the other dog took the picture. How cool. A dog that knows how to use a camera! 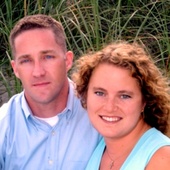