At Keller Williams Ballantyne Area, Charlotte, NC, our Surprise Secret Guest for our Team Meeting day was  someone who has defeated blind-faith in a way most of us will never experience.  Trevor Thomas, who met the challenge of being blind and completed the hike of the Appalachian Trail, 2100 miles of walking and hiking .  One day Trevor was finishing law school and waiting to be sent to Greece as an JAG officer for the Navy, and the next day he was at an optometrist's office hearing that he had a rare disease which would make him blind within weeks or months.  But within the time of grief of losing his sight, he heard a speech from another blind person, Eric Weihenmayer, who had climbed Mt Everest, so he planned his adventure and course to overcome the parody of his handicap of blindness.  As I listened to his story......he said, "You know, a newspaper addressed an article about me stating, "So You Think You've Had a Bad Day?".  On his trek of the Appalachian Trail and his solitary journey, he hitch-hiked with hikers who were going his way and he traveled along beside of them, different groups, like boy scouts, couples, people who were doing short stints on the trail,  but there were many lonely moments alone as the weather changed to snow, storms, winds at 60 mph and a hurricane that blew through the upper part of the northeast.  Although he made it through the canyons and around the mountainside of some of the most treacherous trails from Georgiato Maine.  So if you think you've had a Bad Day, NOT!  If you would love to hear him speak of his experiences and the people he met, he would love to share his story.  As he prepares to complete the Pacific Crest from Mexico to Canada journey take into consideration we are all doing things that might be unknown to us in our real estate business.  Trevor asked us to go home and block our vision and just try to open the refrigerator and find a Coke, or maybe you could just try to wash your clothes and try to figure out if you have the Whites and Darks separated so they don't come out grey.  Maybe none of us spend the time thinking if we lose one sense that it would enhance the other sense's we have.  Trevor Thompson has lived by Faith and Confidence and Overcame Unknown Daily Challenges and put his life into the hands of strangers day after day. Strangers who let him trail with them as risky as it probably seemed to those that took him along.  If he came to a stopping point and didn't know where to turn, he would just stop and wait until someone else came along and advised him which way to go.   Incredible challenges and now he is ready for more.  Stay tuned.....he's off to the Pacific Crest Trail to accomplish that 2500+ miles this spring.  Good Luck Trevor, thanks for sharing.

Wow! Pretty amazing.  The trips he is taking seem like the opposite response most of us would have to getting such a prognosis.  I would not want to take a hike like that ALONE with my five senses intact.  I'm impressed.

Wow that is really amazing and truly aspiring to everyone out there.. That the only road blocks we have are the ones in our head and that it's not impossible to do something. 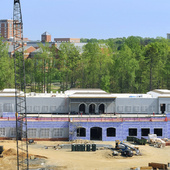