A survey is completed every year by NAR of Home Buyers and Sellers. They interview 120,000 buyers and sellers between July of the previous year and June of the current year. (This survey is now available for download at www.Realtor.org.) Fifty-six percent of the buyers last year were between 25 and 44 years of age with Forty-seven percent of all home buyers being first time buyers. By far the largest group of these first time buyers was in the 25 to 34 age range.  I think this is significant, because when I look at my Board of Realtors, I do not see many Realtors representing this age group (only a very few.)

The survey also pointed out that buyers want most from their agent:  first Honesty and then Representation. This seems to add up to "Trust."

So let's see what some other surveys say.  A Gallup Poll, just released, rated the public's perception of the honesty and ethics of various professions. Nurses rated highest followed by Druggists and MDs. the lowest being Stock Brokers at 21st and HMO Managers at 22nd.  Although Real Estate Agents were not ranked in November of 2009, using our 2008 ranking, we would have come in at 14 behind Bankers but ahead of Lawyers. (It might have been beneficial not to be ranked after the bad market of 2009.) The Harris Poll organization did a poll on professions in late 2009 also. This was a ranking of the public's perception of Prestigious Occupations.  Again the most prestigious were Firefighters (62%), Scientist (57%) and Doctors (56%.)  The bottom three were somewhat of a surprise to me: Stock Broker (13%), Accountant (11%) and Real Estate agent/broker (5%).

I am not sure how to put this all together.  It looks like 17 % of the population trusts in us but not a lot of respect for us at 5%.  This might give a clue to a final statistic that came from the NAR poll.  About two-thirds of the buyers and sellers were satisfied with the service they received in their transaction (not great) but only 17% used the same agent for their next transaction. 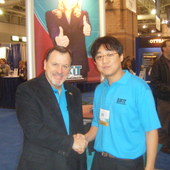