HIP OPERATION - TIP to Pass on to others

I have been so lucky. I have barely known a day's

illness my entire life, and I have never had to grace the portals of a hospital other than to visit some other less fortunate soul (like my tom-boy daughter when she broke an arm jumping off a cliff into the water far below and forgot to "tuck in" her arm before hitting the water.)

So now it was my turn. At the tender age of 62, my right hip decided "too much wear and tear" and packed up. The pain had become unbearable, so much so that my blood pressure (systolic & dystolic) had shot up 40 points prior to the operation.

Background which may help others: This all began about 4 years ago when I started to get a pain in the hip. I went to Physios', Chiros' and the one Chiro said I was pro-nating (arch in the foot collapsing). This was very possible as being a bit lazy with tying up shoelaces, I had worn "slip-on" shoes for about 10 years. (These do not give much arch support.) Anyway, "shoe inserts" allowed me to keep on jogging 3 times a week for another 2 years. When the pain became

bad again, I bought the most expensive "inserts" possible and waited for the cure. It never came about. Things had got so bad now, that I could no longer walk 18 holes of golf. Being an active person, and no golf, and no running, I decided to go the Doctor and to explain the pain which was now manifesting itself in the right knee. (Some days the pain in the right knee was worse than the pain in the hip)

Doctor sent me for X-rays. When I visited the Orthopaedic Surgeon and I saw the X-rays, it was so clear. There was about a 1/4" gap between the left sketal bone and the hip joint. On the right side, it was "bone on bone".

The operation was done on the 11 March and have been home for about a week now - what a difference. No pain !!! - I take a Tylenol before going to bed merely in case some pain occurs during the night.

Tip to pass on:  After the operation, I could only sleep on my back and you know what happens when a man sleeps on his back (many Z.Z.Zs'.... which is why the right side of the bed in the picture is empty).

Because of the new hip sleeping on the right side was totally out. The nurses encouraged me to put a pillow between my legs and try and sleep on my left side but within 5 minutes I would develop such tension in my right buttock that I would just go back to sleeping on my back and of course that meant more Z..Z..Z..s.

The secret: After much experimentation - 3 pillows enable you to sleep on the side of the good hip. How to use them: instead of 1 pillow between the legs try 2 pillows. This seems to act as the right buffer for me. Use the 3rd pillow to either prop up the buttock or put it under the knee of the good leg so that you have sheet, pillow, good leg then the 2 pillows.

That's it folks: Probably a boring "blog" for most people, but for those who know of someone going in for a hip op one of these days, the pillows will help you get a "good night's sleep" and speed up your recovery.

Last Tip: I have been cautioned about trying to "walk too far too soon". I know of two people whose recovery was set back by being too ambitious to early.

Am going to send your blog to someone we know who is going to have surgery this week.

Dane, two of my karate buddies have gone through this and luckily I've avoided damage.  Your comment at the bottom about aggressively attempting a quick recovery is spot on.  Give it a little time and the benefit will last much longer.  Thanks!

I have had both hips done: I play squash, ski, golf and if enough wine, can dance a bit. Have a good recovery.

Hi Ty, the PERFECT feedback. I look forward to doing "em all" with the passage of time. 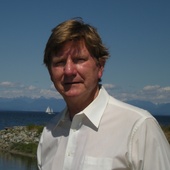