The history of Copperopolis would not be complete without mentioning the history of Lake Tulloch.  David Tulloch and his family emigrated to California in the early 1850's.  they originally settled in Knights Ferry.  At that time Knights Ferry was considered the center of Placer gold mining on the Stanislaus River.  After the great flood of 1862 Mr Tulloch rebuilt the flour mills at Knights Ferry.  these were very important to the miners and other locals to support the search for gold.   At that time the son of David Tulloch also acquired what was called the Knights Ferry Ditch which was used to produce power to the down stream areas.  The Tulloch Reservoir backs up water in the river canyon for seven miles and formed a large lake that is known as Lake Tulloch.

When at the Lake one of the main landmarks to observe is Table Mountain.  It is thirty miles long.  It wa formed from a stream of lava and is at least 150 feet thick.  In spring time the curious hike to the top of the mountain where ponds of water and many species of wild flowers can be seen.  This is private property so permission should be obtained prior to attempting a climb.  Eagles, deer, and other animals can be seen around the mountain.

Another great landmark to observe are the rock fences.  There are miles of rock fences through out Calaveras County.  These fences came about because rock was cleared from the fields and because the "cheapest" building materials available for fence building.  In addition to being free of cost,  the fence was not only immune to fire, but made a splendid fire stop.  The were all build by hand with each rock being fitted tightly into its place.  Jimmie Sykes was known as the master rock fence builder in Copperopolis and the surrounding area.  Be sure to watch for these wonderful reminders of the past. 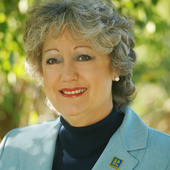 LAKE TULLOCH is the best place in the world to live. Of course that's how I feel as I sit on my deck looking out at a beautiful lake! Bonnie