I have this good friend who is on a mission! Recently she had enough and decided to take on Raleigh and all the litterbugs by herself.  Below is her 1st blog post explaining "The Birth of TrashFairy".  I've been following her blog and I am amazed at her passion and work.  In just a few short months she has really cleaned up allot!  With that being said, I have decided I need to share her websites and help her get noticed.  I also think it would be amazing if 1. we can replace her red wagon that someone stole from her while she was out cleaning up trash 2. get her a logo, 3. help raise money to fund what she is doing for our homes!

Thank you TrashFairy!  You are an amazing women!

Have you ever been driving down the road and seen litter in the gutter? Have you ever wondered about the person who left it there and their thoughts just before they opened their hand and let the trash fall away from their grip?

Every day on my way to work I see trash strewn about the roads, sidewalks, parking lots and lawns that I pass. And when I arrive at work, I see more trash ... around the apartment community where I work. And while I don't stop in the middle of traffic to chase down a stray grocery bag, I do pick up trash every day at work. So does my maintenance staff. (One of the grossest things I've picked up to date were the dirty diapers that one woman used to throw into the woods behind her apartment.) And somehow, every day when we get to work, there is more trash on the ground.

I can believe that a little of this trash arrives at the community by way of the wind, like the occasional chuck that makes its way to the yard at my house. But I find it difficult to believe that the large majority ends up here by that route. This means that people are throwing trash on the ground right outside their own front door.

If so many people are willing to litter right next to their own homes, how in the world can we hope to stop them from chucking crap out the windows of cars on the highway?

Naively, I got the idea that I could just ask them to knock it off. So I wrote a letter to all the residents of my community. I very nicely asked them to be aware of trash "accidentally" falling from their vehicles or blowing away from them.

And they listened and never threw trash on the ground again, and everyone lived happily ever after. The End.

Yeah, right. Actually, no one seemed to notice the letters. And no one seemed to think it was a big deal to drop fast food wrappers out their car door onto the parking lots. So the staff kept picking up their trash. (Thankfully, I never picked up any of those letters from the ground.)

One day I arrived at work to find beer cans, bottles, cigarette butts and those big red plastic tumblers covering the grass and spanning the length of an entire building near the rental office. I started knocking on doors and quickly found out who'd had a big messy party the night before. As I headed to that door, my head spun with all the things I wanted to say to those residents, three young roommates (two guys and a girl). But when I arrived, what came out was as follows:

"The TrashFairy doesn't work here. You have until noon to clean up every piece of trash around this entire building, whether you personally put it down or not. At noon I will begin picking up trash, and I will charge you a dollar for every piece that I have to clean up."

Then I turned and headed to the rental office.

To my great surprise, they threw on their clothes, grabbed some bags and jumped to it! When they were finished, they came and asked me to inspect their work to make sure it was clean enough to keep them from incurring charges on their account. It was. I was truly amazed.

I hoped that part of the reason they'd rushed to it so quickly was because of the guilt of seeing a person who hadn't put down any trash work to clean it up. But it was probably 100% the threat to their wallet. Which makes me think that the only reason fines for littering don't actually prevent litter is that it's nearly impossible to catch someone in the act.

Since the day of the red tumblers, I've been trying to figure out ways to get people to stop littering. How to get people to clean up the litter that is already on the ground. And wondering what goes through the head of the person who rolls down their window and tosses out an empty styrofoam cup, expecting it to find its own way to the dump.

My mission is to help clean up the city in which I live and convince others to do the same. My hope is that every citizen will pick up one piece of trash after reading this. And that once a person picks up someone else's trash, they'll be less likely to throw down their own.

My wife and I never litter, but we could use a little hope keeping the house in order.  How far does the trash fairy travel?

Your cause is truly a noble one, we need to get her a cape

There are plenty of communities that could benefit greatly from the efforts of the "Trash Fairy".  We all need one, for sure. The Trash Fairy needs the help of our Super Hero!

The Wizzard of Waste! Melissa- This is a great ACTION story. We all need to find the Trash Fairy within ourselves. Litter is the worst part of living in NC. We live in such a beautiful state & we all need to make an extra effort to clean it up. Thanks for sharing this story of someone who took a stand! 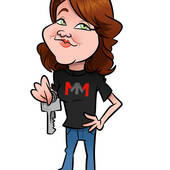