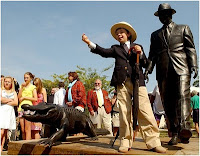 Samuel Arnal 10, stands by the staute dedicated to his grandfather Charles Fraser during it's unveiling at the Compass Rose park on Hilton Head Island. " He loves that photo," said Samuels mother, Laura Lawton Fraser. "He's always imitating the walk at home" / Sarah Welliver/ The Island Packet

Hilton Head Island residents saw history cast forever into bronze Saturday at the unveiling of the Charles E. Fraser Statue in Compass Rose Park. The statue is the product of several years of planning by the Community Foundation of the Lowcountry and its Public Art Fund, created in 2005. It depicts the photograph that appeared in the March 3, 1962, edition of the Saturday Evening Post showing Fraser walking with an alligator on the Sea Pines Ocean Course. Fraser, who died in 2002, founded the Sea Pines Co. in 1956, and the photograph helped put Hilton Head on the map as a tourist destination. Many members of Fraser's family were in attendance at the park on Pope Avenue, including his widow, Mary Fraser. "It's wonderful to have his feet back on the land," she said. "He came, he saw, he did. He perceived what others did not and took a stand for it." Laura Lawton Fraser praised her father's legacy of having created opportunities for tourism on Hilton Head while preserving the local environment. She said his experiences studying land-use covenants as a law student at Yale University were an important step in forming his vision for the island. "That's when he knew he could take something beautiful and keep it beautiful," she said. Mayor Tom Peeples was on hand to dedicate the statue, as were acolytes of Fraser's in the development community. Jim Chaffin, a Heritage Classic Foundation board member who worked for Fraser at the Sea Pines Co. and later started his own development firm, discussed Fraser's unique approach to development, including the addition of bike lanes, which Chaffin said were a novelty in the 1960s. "Who else had a line item in their budget for 'fun and sizzle'?" he said. The total cost of the statue was $126,000, said Carolyn Torgersen, vice president for marketing and communications for the Community Foundation, with all money raised through private contributions. The Community Foundation commissioned sculptor Susie Chisholm of Savannah to create the Fraser statue, which measures just over 6 feet tall. Darrell Davis of Texas sculpted the 10-foot-long alligator.

The above article is from the Island Packet. It was a beautiful morning, and a nice dedication to my uncle Charles. Jim Chaffin gave a nice speech about Charles and how he inspired others to make Hilton Head what it is today. My aunt Mary and my cousins Wymann Davis and laura Lawton Fraser were on hand with their children all present. Below is a picture of my family wife Linda son Charles Elliott and my son's girlfriend Alex Corby. Three generations of Charles Fraser's.