Recently I had the opportunity to visit “Boscobel”, widely regarded as one of the finest examples of Federal interiors in the country. Boscobel was originally located in Montrose, New York, about fifteen miles south of the present site, with views overlooking the Hudson River at Haverstraw Bay. It was built by States Morris Dyckman (1755-1806), a descendant of one of the early Dutch families of New Amsterdam. As a Loyalist during the American Revolution, States became a clerk for the British Army's Quartermaster Department in New York. He and his family returned to England to wait out the War and after receiving a pardon from the new American Govt. they arrived back in New York in 1804. He immediately started the work on his mansion and sadly he died before the foundation was finished. His widow carried on and “Boscobel” was finished in 1809. Although no architect has been identified for the building, it has long been considered to be an outstanding example of Federal domestic architecture in America. One can assume that States was influenced by what he had seen in England, particularly the designs of Robert Adam (1728-1792) and his contemporaries. It is possible that he had the architectural plans for his new house drawn in England since construction was started within six months of his return to the Hudson Valley in the summer of 1804. Boscobel is distinguished by its delicate neoclassical detailing on the exterior, as well as for a unique architectural feature on the front facade--the carved wooden swags of drapery with bowknots and tassels installed between the columns supporting the pediment above the second floor balcony. Several other architectural refinements are used to help convey a feeling of lightness and airiness that make the house seem more elegant and graceful than many of its contemporaries. About one-third of the front facade is glass. The three part windows used on the first and second stories are slightly recessed to accent the central pavilion. Recent technological advances in the manufacture of stronger crown glass enabled the builders to use larger panes of glass and much thinner glazing bars. Another architectural feature worth noting is the closely fitted matched boards on the front facade, in contrast to the overlapping clapboards used on the side and rear elevations. This provided for a smoother surface probably meant to simulate masonry rather than wood on the dress front of the house. 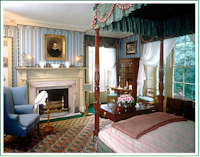 Today, Boscobel is considered to be one of the nation's leading historic house museums. It features an important collection of decorative arts from the Federal period with high-style furniture by Duncan Phyfe and other recognized New York cabinetmakers of the day. Many of States Dyckman's original purchases of English china, silver, glass and part of his library have also survived and are on exhibit in the mansion. I was so fortunate to be given a tour by the acting curator Judith Pavelock, she was generous with her time and I was enthralled with the amazing history of this beautiful house. Bosobel is, as all historic house museums, a challenge to fund and operate, from what I experienced, the Dyckeman’s would be so pleased with the stewardship of the staff. I urge you to visit and support this American treasure, it is so worth the effort and if you are a student American Decorative Arts it is a must. much of the above text was taken from a history written by Charles T. Lyle. www.boscobel.org
Like favorite_border
favorite_border 0
Re-Blog
repeat 0
bookmark_borderbookmark