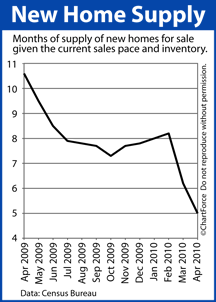 The supply of newly-built homes for sales plummeted in April, a positive indicator for the South Orange County housing market as we head into the summer months.

It's no wonder that homebuilders are breaking new ground at the fastest clip in 2 years.

At the current sales pace, the nation's complete supply of new homes would be sold in just 5 month's time.  That's more than double the pace of a year ago.

Also, as more good news, in terms of total housing units, the government reports that New Home Sales topped one half-million homes sold for the first time since May 2008.

It's a similar spike as within the Existing Home Sales data released earlier this week.

But before we declare the housing market "repaired in full", we have to consider a few of the reasons why home sales are charting so strongly.

The first reason is the federal homebuyer tax credit's April 30 expiration. In order to claim up to $8,000 in tax credits, home buyers must have been in mutual contract for a property before May 1. There is no doubt this contributed to a run-up in sales, especially among first-time home buyers.

The second reason is that mortgage rates have remained exceptionally low, defying expert predictions.  Low rates don't sell homes, but they do make monthly payments easier to manage for households torn between renting or buying.

And, lastly, March and April's new home sales may have been buoyed by aggressive discounting on behalf of homebuilders.  As compared to February 2010, April's average new home sale price was lower by 13 percent.  That's a sharp drop in a short period of time.

For now, though, homes are selling, supplies are dropping, and buyer interest is high. It's no wonder builder confidence is soaring.

Thank you for the uplifting news! 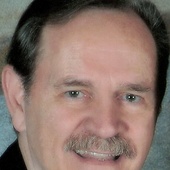