We surf the Internet.
We swim in magazines.

Barely noticed amidst the thunderous Internet clamor is the simple fact that magazine readership has risen over the past five years. Even in the age of the Internet, even among the groups one would assume are most singularly hooked on digital media, the appeal of magazines is growing.

Think of it this way: during the 12-year life of Google, magazine readership actually increased 11 percent.

What it proves, once again, is that a new medium doesn't necessarily displace an existing one. Just as movies didn't kill radio. Just as TV didn't kill movies. An established medium can continue to flourish so long as it continues to offer a unique experience. And, as reader loyalty and growth demonstrate, magazines do.

Which is why people aren't giving up swimming, just because they also enjoy surfing.

Groups:
Orange County Real Estate
Inland Empire Marketing
It's all about them (ThemThem) 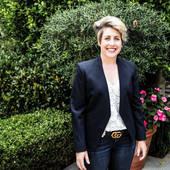