It was session three of the seven weeks of our S.P.A.R.K. Course and one Agent after another approached me at each break.  Each comment or question had the same theme.  It was weird.

Each Agent said something along the line of, "I can see how this is really going to work for me but here is the problem."  Or, "This is great stuff and it would really work for me except her is what I face."

There are over a hundred people in the class and over a dozen of them expressed this type of sentiment.  The problems ranged from other jobs that took their time, taking care of children, to not enough experience and more.  It was clear that the problem had nothing to do with the issues that they were bringing up.  Something else was going on...

Driving away from the conference center I realized what it was.  As these Agents began seeing and feeling that they were capable of achieving and exceeding their business goals, when they were sincerely confronted by the prospect of their own success, then the psychological barriers that have prevented their success began to come to their consciousness.  Their mind perceived their most desired future for their business and their psyche was finding the reasons that it was not likely or possible to achieve it.

This is the definition of a limiting belief; a thought that is perceived as the absolute truth by the person having it; when in reality it is a false barrier.  So, at the following session I led them through an exercise to identify and eliminate limiting beliefs.  The response was overwhelming.  One after another was experiencing a breakthrough they knew was possible but couldn't previously quite reach.  Now it was happening.  The skills were there and the barriers were not.

They described it as powerful.  If you would like a copy of the exercise, it is just a few steps in a couple of pages, e-mail my assistant Rebecca@RichLevin.com   We'll get it right off to you and then I'd love to get your feedback on your experience of it.

Profound post.    For whatever reason, and sometimes it's not clearly visible, we are the thing that stops us going forward.    We create the walls of our existence. 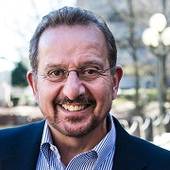