As I watched my daughter graduated with her class Tuesday I sat in all as to how fast the years have flown.  i watched as she learned to crawl and walk and ride a new bike.  I watch in great pride through all the color guard and flag routines.  Now I watch her finish one milestone and head straight into a new world of her own. She graduated with a 3.9 GPA and received 3 scholarships in Criminal Justice Forensic Science.  She was told in elementary school she just didn't learn like the rest.  They felt she would be better off in a special class so she could learn a career.  But she was just a late bloomer, one that struggled to read and understand and was later found to have audio processing problem.  Finally a diagnosis, she was given new ways to learn, home school, tutoring, then as she entered high school she wanted to give it her best, and that she did!  To all those who have been told your child can't learn , maybe they just need to see how the child learns, and go with it, treat them like they are like the rest but help them learn the way God designed them to be!  Turns out Brittany was a visual learner and when given the right tools and taught by how she learned and not how everyone else learns they found a very smart and intelligent child that took flight and jump all the hurdles, and graduates with honor.  In the grocery store a retired spacial ed worker that once tested Brittany ask how she was doing I told her about graduation and that Brittany was headed to collage and she was thrilled and so excited for it was her that told me the secret long ago on how to fight the school system and win.  She said don't back down, fight for her and never give into the system.  We followed her advice and I am so glad I did, because a child with the faith and determination and support will make it and pass the rest on the way to the top! Congratulation Brittany , great job we are so proud of you and I know in my heart you will take collage by storm and once again fight your way to the top!

Congrats to your little girl, and good luck to her.

Congrats on your daughter's graduation! That was an inspiring post. I wish her the best of luck in college and in the future.

Good lesson for all parents.  When I'm not practicing real estate law, I represent kids and families with special needs against our (generally) pitiful public school system.  Every kid has potential. Never let anyone, especially a school administrator, tell you different. Go Brittany! - Scott 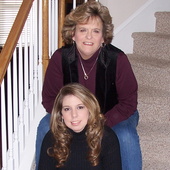