Walt Disney Co. plans to unveil Wednesday its first foray into residential real estate in more than a decade with a pricey vacation-home development in Florida's Walt Disney World.

It's a risky move. Disney will offer homes priced between $1.5 million and $8 million in a state where the foreclosure rate remains among the nation's highest. In Orlando, where brokers say home values have dropped between 50% and 60% from the peak, Disney's pricing would put its homes near the top of the market. According to Realtor.com, the average price of new listings in greater Orlando this year is just over $243,000.

But Disney believes the market for luxury homes is rebounding. Despite adding wine-tasting events and VIP park tours in recent years, "The affluent market is an area where we haven't offered a lot of product," says Matt Kelly, vice president of Disney resort real-estate development.

The hotel will sit in the center of the development, to the south and east of one of the original golf courses, which will be updated. 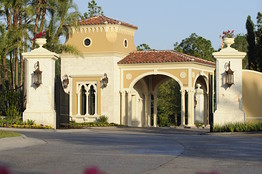 It could be risky, as Florida's foreclosure rates remain among the nation's highest. Disney's pricing would put its homes near the top of the market. At left, the gatehouse at the entrance of Golden Oak.

Plans also call for a clubhouse, parks and pedestrian walkways, with wetlands and other conservation area comprising about half the project's acreage.

Golden Oak will test whether Walt Disney World is compelling enough for the well-heeled to buy a home there instead of in other family-friendly resort towns. But the test will be a limited one: Fewer than 30 lots will be available for sale this year, with the first homes expected to be finished in 2011. The timing and scale of a second phase that may offer fully-built homes remains undecided. Disney declined to reveal its investment in the project. 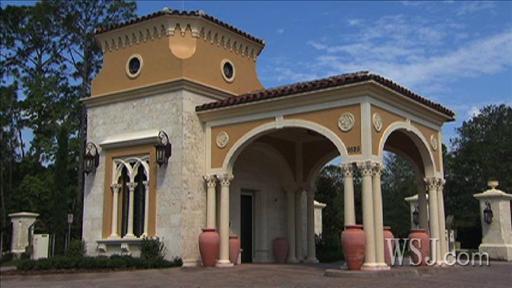 "This may be the first time that a kind of man-made entertainment center has generated that kind of real-estate activity," says Elizabeth Plater-Zyberk, the dean of architecture at the University of Miami. Her town-planning ideas influenced Disney's first home development, called Celebration. She is not involved in Golden Oak.

Lots will be offered in sizes from a quarter to three-quarters of an acre. Though buyers can hire their own architects, Disney requires they hire builders, choose from exterior building material and adhere to architectural styles that it has approved.

Celebration, a 4,900-acre development adjacent to Disney's Orlando theme parks, was touted in the mid-1990s as a new model of small-town living. The pedestrian-oriented, primary-home community was designed to be economically diverse, with apartments renting for $600 a month near single-family homes, which started at $185,000 and went up to $4 million.

About 6,000 homes have been sold in Celebration, Disney's Mr. Kelly says. Disney owns some commercial acreage in the town and is involved with commercial development there, but now has a fairly hands-off relationship with Celebration day-to-day, he adds. Pat Wasson, Celebration's executive director, agrees with the characterization.

The Disney connection hasn't immunized Celebration from slumps. The median value of homes in the town as of April 2010 was $191,500, according to real-estate data provider Zillow.com, down nearly 60% from the peak four years earlier.

Early reaction to the project appears mixed. "I think it will be successful, knowing the attention Disney puts into its projects," says Roger Soderstrom, owner of Orlando luxury-home broker Stirling Sotheby's International Realty, adding that the location and access to entertainment would be hard to beat.

Miami architect Terence Riley says: "Much of the discussion about Celebration when it was built was that it had this idealistic notion that small towns were the best model, and that in small towns you could not have gated communities and economic segregation." Golden Oak, he adds, "seems like they are stepping a bit back from that."

"We don't really relate it at all to what we did at Celebration," Mr. Kelly says, adding that Golden Oak is different from Celebration because it's a resort community meant to offer a new way to experience Disney World, not a primary-home development. "I think by any measure Celebration was a tremendous success," he adds.

Discussions for a luxury-home project began around 2005 when planners for Walt Disney Parks and Resorts began to discuss whether the two golf courses might be better off being redeveloped. Golf courses within and near Disney World are abundant. At about the same time, the Four Seasons Hotels and Resorts , which had long wanted a location in Orlando because of its draw as a theme park and convention destination, approached Disney about opening a hotel near its theme parks.

Disney estimates Golden Oak could take eight to 10 years to complete. Buyers interested in the first lots must deposit $25,000 to be placed on a sales reservation-list. All buyers who use The Florida Living Team to purchase a home at the Golden Oaks can  receive an additional $2000 toward closing cost by mentioning this special. Must you the Florida Living Team to represent the Buyer sale. Call 407-616-7286 for more details.

Steve, I don't think you are going to have to many American's being able to afford that kind of luxury.  You will have foreign investors buying this kind of caliber.  It depends on how strict they are going to make the rules as far as renting them out after purchase or not. 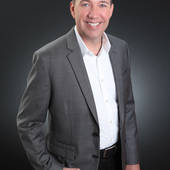