Although it’s been hot and muggy lately in Northwest Wisconsin, it’s never too early to start planning ahead.  If you’re buying a home or cabin up north, you may want to take extra precautions so its septic system doesn’t freeze up this winter.

This is usually only a problem during extremely cold winters when there’s very little snow.  We experienced an epidemic of frozen septic systems back in the winter of 2002-2003.  Some small towns in Northern Wisconsin even had their municipal systems freeze when the frost reached depths of eight or nine feet.

To prevent these problems from happening in the first place, your best bet is to to buy several bales of straw next November.  Break them apart and fluff up the straw as you spread it out over the ground above your septic system and drain field.  You may also want to spread some over the area between your house and the septic tank.  In the spring, this straw will make great mulch for your garden.

(Every fall around here, you’ll see ads for “sewer hay.”  That term is used generically; it’s up-north lingo for just this kind of situation.  But make sure you get clean straw, rather than substandard hay with lots of weed seeds.)

Or, if you’re not into gardening, go to the home improvement store next November for a few sheets of 2” foam insulation.  Lay them out over your septic tank and drain field, put a couple of rocks on them so they don’t blow away before they’re covered with snow, and then sit back and wait for winter.

Need a break from studying up on septic sucking issues?  Relax a bit by viewing some of my current listings (and maybe even take a few virtual video tours via YouTube), just click

YEOW!  I NEVER though of a septic system freezing.  The insulation slabs are a great idea 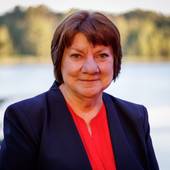