The Great Basin is unique when it comes to water because the rivers have no outlet to the sea.

It is made up of many smaller drainage basins.

There is a complicated system of hydrology below the very interesting geology and topography of fractured, tilted plates of the Earth's crust, that make up the Great Basin. Often referred to as Basin and Range because those tilted plates create mountain ranges that run from north to south. As the Earths crust stretched, cracked and tilted, it created large dry valleys or basins between the ranges. These basins can be compared to bowls that collect the snowmelt off the mountains. The alluvial fans are like great sponges, absorbing the meltwater into the ground. The snowpack is the primary recharge for the aquifers.

Nevada and the Great Basin is divided by the Nevada State Engineers Office into 256 ground water basins, some are "designated basins". Designated basins, when it comes to water, may only be open to additional allocations for preferred uses, like municipalities for additional pumping.

Scientists are and have been measuring water table levels, spring flow rates, and precipitation for many years. We know pumping affects water table levels. We know the average precipitation, but then that is history. Today drought is in the news and many scientists believe more drought is likely in our future, due to climate pattern changes taking place. Future recharge rates are speculative.

They know the maximum consumption allowed by the existing recorded water rights. Not all basins are decreed and some additional rights could be out there and are not recorded but valid. Domestic wells are generally not considered, no permit is required to drill a domestic well, and they are limited to two acre feet per year in consumption.

The terminology of Hydrology seems very complicated, at least for this layperson. The science, like most science attempting to make future projections is speculative, especially the flows between the many basins and the aquifer recharge rates. New discoveries in all science fields rewrite what we thought we knew as fact, everyday.

Unfortunately, we may not have the answers to some of the most important questions until the water tables have dropped and the Seeps and Springs are gone. The scientists can not tell us when the flow rates of Seeps and the Springs may slow, or even dry up. The truth is they can only speculate. They do not know how drought will affect recharge rates of the aquifers, and they certainly do not know how long or severe the drought may be. There is far more that science is unsure of, than there is that can be actually guaranteed.

July 27, 2010 at the Aspen Institute's Environment Forum, Former U.S. Secretary of the Interior Bruce Babbitt at the "Hot and Dry: Water in the West and the World," told the audience,

"Water scarcity is an issue, not everywhere, but in some regions. The American Southwest is not one of those regions where there is water scarcity. It's hard to believe given all the hyping in the national and local and regional press."

This is right in line with Pat Mulroy's statement when she said, "The hyperbole (hyper exaggerations) coming from rural Nevadan's about their water table concerns was childish."

You have to wonder what motivates Mr. Babbitt to say such a stupid thing, but then Pat Mulroy was also on the three person panel with him, and they were in Aspen Colorado. A poster child for conspicuous consumption and environmental lunatics. These are people who would like to tell you how many children you are allowed to have, and how large your carbon footprint can be, as they fly off in their private jet. They are asking for more of your dollars in the form of Obama's Green stimulus money. Watch the classic intellectual arrogance on the forum videos!

They have already spent $ 80 Billion Dollars on Green stimulus bailout, and by the way, Harry Reid is claiming credit for the few short term jobs in Nevada this money created in his political race against Sharron Angle.

Southern Nevada Water Authority has proposed a pipeline from Las Vegas through Lincoln County and continuing into White Pine County on to the North. The Las Vegas Valley water district, now SNWA, filed 146 ground water applications in 1989 for undeveloped, unproven ground water in Eastern Nevada. This spark has lit the fuse for the battles to come. They do not at this time have approval for the water needed to supply this pipeline.

The Colorado River Compact allows Las Vegas 400,000 acre feet of water from Lake Mead. On average, one acre foot will supply two homes per year. A study by the Scripps Institution of Oceanography in San Diego said there's a 50 percent chance that Lake Mead, could run dry by 2021. In the last ten years Lake Mead has dropped from around 1200 ft. to below 1100 ft. today. At 1050 ft. Hoover Dam will stop generating electricity, and at 1000 ft. Las Vegas will lose the lower intake for the city‘s water supply.

Currently Lake Mead (The Colorado River) supplies 90% of the water to the Las Vegas Metro area. The Colorado River serves Arizona, California, Colorado, Nevada, New Mexico, Wyoming, Utah, and Mexico, over 30 million people live in this region. We now know that based on the twenty year river flow study leading up to the Colorado River Compact in 1922, the river was over allocated by one million acre feet when the compact was signed and the shortage has only become worse.

The NASA/German Aerospace Center Gravity Recovery and Climate Experiment (Grace) study has found since 2003 the aquifers for California's primary agricultural region the Central Valley and its major mountain water source the Sierra Nevada have lost nearly enough water combined to fill Lake Mead, America's largest reservoir. This area represents nearly one sixth of all the United States irrigated land and the dropping water tables have the potential to have huge implications to the US economy.

None of this news is new , in fact the warnings have been ignored for over one hundred years. Panelists Bruce Babbit, Pat Mulroy, Sandra Postel and The Aspen Institute's Environment Forum are apparently more interested in advancing their agenda than dealing with facts and truth.

"You are piling up a heritage of conflict and litigation over the water rights, there is no sufficient water to supply the land."

Many, many scientific studies today are clearly confirming his thoughts.

I wonder what John Wesley Powell would think today?

How limited are your water resources? 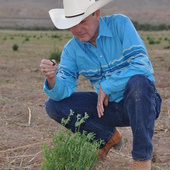