Life in Westmoreland, NH ...How a Clever Flatlander came to be living in the hills of Southwestern New Hampshire.

When my husband learned he was being transferred from Flatland Sudbury, MA to work in Charlestown, NH, we were thrilled!  We'd always hoped to escape suburbia in order to embrace a more rural lifestyle, and when the opportunity presented itself, we jumped at it.  After some preliminary research, we were pretty sure that we wanted to be near Keene, NH, although we preferred something just outside the city.

We decided to take the first available weekend to head north to check things out. Bear in mind that this was over a decade ago...long before GPS...so we decided to wing it and go wherever the roads led us.

Crazy as it sounds, we kept finding ourselves in this very small town outside of Keene, NH.  No matter where we began, the small farming community of Westmoreland was where we ended up.  It took us nearly two days to realize that the roads that lead into this country town are like spokes on a wheel, (albeit a bent wheel with wonky spokes) and, once we did, we acknowledged that Fate was likely tiring of repeatedly pointing us in the direction of our destiny.  So, we decided to stick around and explore this town of approximately 36 square miles...with no map and virtually non-existent cell service; nothing but a clueless curiosity sense of adventure and a sneaking suspicion that this just might be where we belonged.

Looking back eleven years later, I have to laugh at our initial trepidation as we traveled through hills and valleys, up dirt roads that seemed to have no end, and our fear that we'd end up, literally, in the middle of nowhere, hopelessly lost and never to be seen again.  Being Clever Flatlanders, we decided that the best way to determine whether we were still within the reach of civilization was to keep an eye on the power lines and poles.  As we bumped our way down rural stretches of unpaved road, we made sure that our "lifelines" were within view.  If we reached "the end of the line," we turned around and backtracked.  'Cuz that's what Clever Flatlanders do.

With the car windows wide open, we marvelled at the countryside.  One minute we'd be driving through a shady tunnel of gigantic maple trees, the next we'd be overlooking rolling fields and hills laid out before us.  Charming old farmhouses dotted the landscape, the only movement a gentle breeze flirting with the grasses and wildflowers and the lazy meanderings of cows and sheep as they grazed in the distance.

Another unexpected turn graced us with a picture perfect view of the Connecticut River: a wide and sparkling ribbon marking the boundary between New Hampshire and Vermont.  Not only was it absolutely beautiful, it was reassuring, for Clever Flatlanders know that if you follow a river downstream, eventually it leads to the sea (or, in our case, the Atlantic,) and we knew how to get back to Flatland Sudbury from the coast.

Supposed geographic certainties aside, we were completely taken in by the scenery, and the incredible feeling of tranquility quelled any residual fears we had of being lost forever. In fact, it had just the opposite effect.  Without even uttering the words, we knew:  we were home. Unbeknownst to me, this was only the beginning of The Flatlander Follies...

Kim, from one flat-lander to another, I never saw a dirt road until I moved north of the Massachusetts boarder...now I live on one. The Blue ribbon of any river in the north country is all the more enticing, when one realizes it is clean enough to pull over anywhere for an impromptu swim with out fear of botulism...or gangrene setting in. I am no long a yuppie from Sudbury...I'm a redneck Realtor, from the great white north.

This is fabulous stuff...serious question, what is your internet connection like?  We have been venturing out beyond the Beltway and my #1 requirement is high speed internet.  What are your options up there?

I would like to see more of the area...it's gorgeous - and I love your house.

Steve--we are both very happy Mass-plants, I think.  Truth be told, one of the best parts of visiting friends and family back in 'bury is coming back home...to NH!  Redneck Pride, baby! :)

Susan--we have high-speed internet here.  Some areas are still relying on dial-up and satellite, but dsl and cable internet are the norm and are becoming more available everyday.  And cell phone coverage has vastly improved over the years, too.  We're well-connected country folk.

Flatlander is a somewhat derogatory term used by mountain folk in reference to people who live in the lower elevations.  I was first referred to as a Flatlander by my husband's grandfather up in Maine the first time I met him (back in the early 80s).  He said to Scott, "Boy, you found yourself a winner...and she's pretty darn smart for a Flatlander."  I loved that man...he didn't throw compliments around very often, and that was high praise from a man who more often described people as "$hit-for-brains" :)

I love how I call Wrightstown rural.  Uh...yeah. We're so not.  I love looking at your photos, and finding out how you ended up there.  What a great story.

Kim:  What a lovely place Westmoreland seems to be.  I love your story of being called a "Flatlander."  It sounds like that mountain man really liked you... :)

I watched your video, and just loved what I saw.  Much too cold a place for me to live right now, but I bet it is just gorgeous there.  I seemed to be using the word "love" a lot, here, but it seems to fit the best.  Your description of the Connecticut River sounds beautiful.  What a joy to be able to jump into the water, and not be in fear of any of the man-made poisons that may be lurking there.

I found you in a comment on a Paul Slaybaugh blog post... in case you may have been wondering.

I am originally from Cleveland, Ohio.  On some of the much older colonial maps of Northeastern Ohio, the area is referred to a New Connecticut.  I have only been to New England once... about twenty years ago.  I went with a friend who was from Mystic, and although she toured me extensively, I am sure I saw barely the tip of things.

Thanks for a great post.  I will be subscribing to your blog, and adding you as an Associate.  Have a great week... <smile>

I grew up in the flatlands of South Texas. Flatlands and little rain unless a hurricane came through. I like San Diego much better.

Heather...it really did feel as though the decision was made for us.  Seriously, we just kept ending up here, no matter where we started.  It was bizarre...in a good way, of course!

Karen Anne...I'm so glad you stopped by (although now I'm wondering which comment caught your attention <smile>)  You really should try to make another trip to see New England in the Autumn.  It's absolutely incredible!  Winters can be very cold, but they bring their own special beauty.  We really do "love" living here...wonderful people, gorgeous surroundings and although I joke about being a flatlander, the "natives" couldn't be warmer or friendlier.  It's truly where we belong, and we are thankful every day!

If you ever do venture our way, I hope you'll let me know.  I'd love be able to show off some of the Granite State to you.

I've only just started adding to my own subscription list (never made proper use of it until recently!) and am off to add you to mine.  I've seen many of your contributions here on AR, and look forward to getting to know you even better.  Thank you so much for popping by! :)

Russel...by all accounts, San Diego is absolutely fabulous.  I hear the weather is perfect just about every day...is that true?  I hope to get out there to visit someday...there are so many places in this great big country to see, and your adopted "hometown" is definitely on my list!  Thanks for stopping by, fellow Flatlander :) 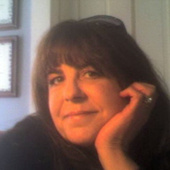