High Five Benefits- Keller Williams Agents Know How to Celebrate A high five is a celebratory gesture made by two people, each raising one hand to slap the raised hand of the other - usually meant to communicate mutual satisfaction to spectators or to extend congratulations from one person to another.

In real estate sales we need to high five each other a lot more than we do which will get those positive endorphins flowing in our brain. I have seen so many agents over the years get listings and close deals and for some it almost seems like a chore. I come from a sporting back ground of horse racing and every win was an occasion to high five. I was a leading trainer on my circuit for several years and during those best of years my win percentage hovered around 14%. That means for every hundred of my horses that ran in a race I only won 14 races. In other words my closing ratio as it is known in real estate was 1 in 7. 1 win for every 7 starts. When I was out listing homes on a daily basis my closing ratio hovered around 70% which meant it took me 1.5 listing appointments to get a single listing.

My son who is also a Realtor, and has been for about 10 years asked some time ago, in a nice way, why I still get such a big thrill or, as he put it, a big head when I get a listing after all these years in the business. I thought about it and the only conclusion I could come to was the thrill, the thrill of victory, getting the signature. I believe that it is that thrill, the releasing of the endorphins that keep me coming back. I think in part the best of the best also have this release no matter how many goals they score, races they win or listings they take, the thrill is still there. Could you imagine a pro ball player getting a touchdown or hitting a home run and hanging his head down and his team mates acting as though they did not see the points being scored and all acting as if it's just another part of the job, such as having to go over an inspection report with a seller. What an exciting game that would be for us to watch. Zig Ziglar commented "People often say that motivation doesn't last. Well, neither does bathing - that's why we recommend it daily."

So the next time you or someone in your office get a listing or makes a deal, give them the high five, release those motivating endorphins by creating excitement in your office.

Very true.  I have always loved the comparison of sports to sales.  We all need that from time to time to keep us going.  Thanks for the reminder! 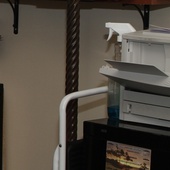