Yesterday my kindergartner announced that it was the last day of Summer.  She did a spinning movement with arms stretched high and announced "goodbye summer, see you next year".

This morning she announced that today it was Fall.  She opened the window shade and started explaining how things were changing because it was now fall.  We walk outside to get into the minivan for school and she says "dad, doesn't it just feel like fall?  So different than yesterday."

She is heading into her 5th fall and vividly remembers last years pumpkin patch adventures. Such joy and excitement. At 5 she is able to grasp the "feeling" of changing seasons .

I, on the other hand, had not bothered to reflect on the seasonal changes.  Not until my kindergartner reminded me.

So take some time today to reflect on the changing of seasons - not from a realty perspective but from life's perspective. At about 10:15 last night I asked my 15 year old daughter if she felt it..."Felt what? she replied...I said "we just crossed over the autumnal equinox...did you feel the bump" "Nope" she said as she danced off to her room...and I chuckled.

I am glad you got to enjoy the moment with your daughter.

What a great post! Fall is definitely here. Love it!

I have always loved it when my children (or any child, for that matter!) remind me to enjoy the simple things in life.

Sometimes it takes a kid to put things in a proper perspective. Don't you wish we could see thing like tat at least one day a week?

Mark - Great post. Yes, technically it is fall, and to celebrate we had 90 degree weather in Indiana.  Good thing your daughter reminded you about it.  Otherwise the change of seasons could have passed you by.

Mike - I'm glad you have that relationship with your daughter.

Richard - Temps don't matter.  If they did, it would be hard to sing White Christmas in Texas.

Lisa -  Most of my simple pleasures are with my kids.

Bill - Thanks. I get a daily dose.

Dan - Appreciate the complement.  I have to admit, my kids remind me of many things  - I almost forgot grandparents day but the kids reminded me ahead of time - squeeked by on that one.

Mark, isn't she adorable.. Wow.  Thanks again for stopping by my blog and giving me that Google Picture Tip.. I'm going to blog on it today and brag about you.  You're the best.  :) Gail 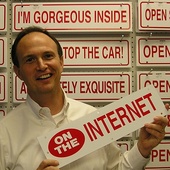