I read some surprising new statistics about blogging, that 8 out of 10 Americans know what a blog is.  For a new form of journalism, albeit a bit questionable i some cases, it has taken the Internet space by storm. I see this is a way of giving a personal voice to those of us who feel so lost in this age of information, not unlike graffiti.

I sometimes feel like a page on a website buried in sub menus that never gets found by the search engines. I'm a kilobyte of information jostled around and shoved aside in the expressway of gigabytes running on T1 lines. So how does one project a true self? A funny question for agents who "are their brand" and have their photo on every piece of communication.

It used to be that kids and teens made their mark with graffiti, advertising their "brand" with stylized, often illegible (to me) type and characters. In New York City graffiti was everywhere there was a surface. Even the subway windows were scratched with names. Someone pointed out to me that on every single subway steel post in every station throughout the five boroughs of NYC was scratched an X. This person was literally making their mark.

Blogs are the new way for people to feel real, to communicate in this age of non-personal communication. It's the natural progression for kids who grew up "talking" in chat rooms and playing massively multiplayer online games with a carefully crafted persona and fantasy lifestyles, never meeting in person their playing counterparts yet knowing their online persona intimately.

For real estate professionals, blogging is a personal voice as well as a tool for SEO. There would be an inclination for old-school agents to want to promote their personal brand, in a self-aggrandizing way. But a blog is an opportunity to open a dialog with prospects, clients and friends. Why not encourage people to get involved, bring community back into their lives? Offer to write a letter to your congressman on their behalf for some issue in your community. Use it as a tool, as technology should be seen as, to facilitate or encourage action, whether it's a charity function, volunteer effort or gathering.

Here're excerpts from the article that triggered by thoughts:

IT'S GETTING TO THE POINT where everybody knows what a blog is.
According to an exclusive Marketing Daily study, eight out of 10 Americans know what "blog" means, and almost half have visited the blogosphere--some as often as daily.

"The high awareness is surprising given that blogging is an emerging media outlet," says Tom Mularz, senior vice president at Synovate eNation, which conducted the online survey of 1,000 U.S. adults. "The segmentation on awareness and usage, and on people having their own blogs, is driven by age, with obviously younger people more active in blogging." Nearly 90% of 25- to-34-year-olds know what a blog is, compared to 64.5% of those age 65-plus. Similarly, 78.4% of 18- to-24-year-olds report they have visited a blog, compared to just 44.7% of older Americans.

Technorati reports there are 99.9 million blogs out there. With so many to choose from, it's no wonder that 54.4% of blog-readers surf a variety of blogs rather than remain loyal to the same sites, according to the eNation study. And an indication that the blogosphere is not too different from the real atmosphere: Men are more commitment-phobic than women. Nearly 60% of guys surf a variety of blogs, compared to 50% of women."

"...Recently, a rep for Marvin Windows and Doors sent a flattering (exact replica) e-mail to several house-bloggers (including this reporter at http://www.fixerupper.typepad.com/) to "better understand how Marvin can better interact and inform you as a home remodeler and blogger."

She offered to provide "how to" tips and recommendations along with updates on company innovations and products. The company's "end, end goal," the rep said in a follow-up note, is to expand "Marvin's footprint as an expert in windows and doors." She teased at the potential for future promotions and advertising, but added, "That's really several months away."

"This does happen on a somewhat frequent basis," says Aaron Olson, who runs houseblogs.net, a network of house-bloggers. "Some are more 'above the board' than others and it really varies."

So who's blogging? Eight percent of Americans have their own blog. "That's high, given that blogging was unheard of a few years ago," says eNation's Mularz. It's also surprising that more women than men are bloggers (given that men tend to dominate the computer/tech fields). Nearly 14% of men versus 20% of women have blogs, eNation reports.

Gwyneth - Interesting info. My take on why more women blog than men has to do with why women talk more than men. They are just more conversational and have a greater need to do so. Plus, blogging can be timeconsuming -- like shopping and that doesn't go well with guys. However, make blogging like golf, TV, sports, etc... and we are there. 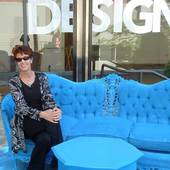 Inside the trenches at a real estate marketing firm that offers an agent website, stealth sites and lead generation system.