have spent my entire professional career in the mortgage industry spanning some 15 years now.  When I first started, it was the oldest of "old school" deal-getting skills.  I would literally start my day with a new letter in the alphabet in my local phone book and start calling.  Rates were in the double digits and there was no such thing as a "do not call list".

When I was fortunate enough to land an eager consumer I would take my hand written loan application for the refinance or purchase and literally walk it over to my processor.  NOTHING was done via computer... everything was handwritten and faxed.  The banks were lending on true credit worthiness and not caring too much as long as the loan made sense.

Obviously with the economic changes and the subprime market debacle, things have certainly changed.  I had almost lost faith in the financial lending system with a particular "perfect" client.  This client had 800+ credit scores, 6 figures cash in assets, 20+ years on the job ~ stable as stable could be right?   Not according to some of the banks I tried sending him through.  I literally would get condition sheets back requesting 3 pages of stips in order to finally gain approval.  I thought to myself ~ if this guy can barely get approved who can?

This rollercoaster or a better metaphor would be pendulum ~ has appeared to hit high on the complete other end of the spectrum. Several years back, it seemed anyone and everyone could get a home loan approved and within the last twelve months those "perfect credit" borrowers have to beg and plead to get through the loan approval process.

As of late though, the banks seem to be loosening their grip again and hopefully things will settle back to some middle ground of the pendulum, where those with desireable credit and even those with just slightly less than desireable credit may actually achieve the American Dream.

It seems in America most things go from one extreme to the other.

It's scary to think that someone like that can't get approved. Hopefully things change soon.

Like
Mark Schmitz
wideiphoto - O'Fallon, MO
Professional Photographer who sees things in their

Like
Mark Schmitz
wideiphoto - O'Fallon, MO
Professional Photographer who sees things in their

Mark, adding to your comment – everything banks are doing is “ridiculous.” I jump hoops for the Bad, Bad, Big-Bad-Banks every day. It’s maddening, frustrating and ridiculous. 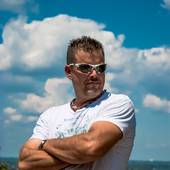