My funny story......I have a springer spaniel named Woody, he is 10 years old.  Woody is a loving, loyal pet with quite a personality.  I think he is half human.  Woody being a spaniel needs to get groomed about every 2-3 months, we take him to the dog salon to get his hair done.  We drop Woody off at the salon and pick him up in the afternoon.  This time when we went to pick him up the staff told us to be careful taking him out to the car because their was a turkey running around on the property (yes, we live in the country) and we had forgotten to bring his lease (ha, ha that is the realtor in me, I meant to say leash).  I think the staff was concerned because being that Woody is a springer spaniel he is considered to be a hunting breed and they didn't want him to hurt the turkey.  As we head out to the truck Woody sees the turkey and he takes off running.....away from the turkey!!!  See Woody does not know that he should be a hunting dog!  The turkey watches Woody run off and then decides to chase after Woody!!  If you can picture this, a "hunting dog" running away being chased by a turkey!  It was so ridiculous we laughed so hard tears were running down our faces!

I hope you enjoyed my funny story!  Have a great day! My dogs entertain me too... way better than television!

One of those moments when you wish you had your video camera.  Our pets can be great entertainment.

Cynthia,  Cute story about your dog.  I imagine that was quite a sight!

I hope his self esteem isn't affected.

Take him out for a chicken sandwich lol

I hope his self esteem isn't affected.

Take him out for a chicken sandwich lol

Cici and Pico will chase squirrels; however, they LOVE to watch BIRDS from their DECK!!! Love it! What a great story, Cynthia.  I've never seen a turkey chase a dog. 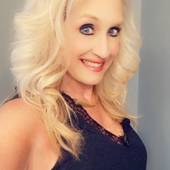