Even the City of Penticton is forced to reduce  prices by $50,000 on real estate they own and currently listed for Sale.

Council approved reducing the price of two city-owned lots at 1125 and 1275 Munson Ave. by $50,000 each at a Nov. 12 in-camera meeting. Councillors Garry Litke and Dan Albas voted against the move.

With the reduction the two properties will now be priced at $1.36 million and $1.25 million respectively.

Mayor Dan Ashton said council made the decision after listing agents advised them that the asking price was too high.

“The reason is that there is price pressure in the market,” said Ashton. “We listened to them and said, ‘OK, we are prepared to reduce their value by $50,000 per listing.’”

Ashton said council discussed whether they should hold onto the properties until the real estate market turns around.

“It depends how long you want to hold off for,” he said. “There was lots of discussion that took place but ... council would like to sell those pieces of property. We think that it would be better as agriculture than what was talked about before.”

The land in question was purchased by the city in 2004 to replace sports fields lost through construction of the South Okanagan Events Centre. Plans for the 12 hectares, spread over three different lots, called for the construction of a sports-complex and fields to serve the specific needs of softball and soccer associations.

The proposal soon ran into opposition from local residents, and eventually the Agricultural Land Commission, because two of the three lots were still zoned as agricultural reserve. And in a 2005 referendum, 56 per cent of voters rejected the development plans.

As of September 2009, according to a city report at the time, $1.4 million remains on the debt for the land with the city still having to continue paying interest on the loan until 2014, regardless of whether or not it pays off the balance of the loan. However, with the city facing a tightening budget, council decided to sell the two agriculturally designated lots, holding onto the third for future development, perhaps as a park.

Former mayor Jake Kimberley called the move to reduce the price, instead of holding out for a market rebound, ridiculous.

Kimberley asserted that while the sale of one of the lots is appropriate, the western lot, located next to the mountain, should be retained by the city.

“It would certainly make for a very good parkland which was what promoted back in 1992 by a parks study done for the city,” said Kimberley, suggesting the area could house amenities such as picnic sites, a community garden or an orchard or growers museum, such as the one in Kelowna.

“The forecast for demand for parks in the city is quite high and we just don’t have any more land. That land should be retained for an expansion for our parks,” he said. “When we get to a population of 50,000 people there is going to be a pretty high demand for parks, so the more land you can acquire, the more parks you can establish while the time is right. And we own the land now, so to sell it off or give it away would be a disaster.” 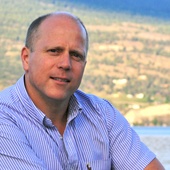