Yikes, it was an entire week of plumbing problems here at WestCoast Home Inspection.  Supply leaks, waste leaks and missing fixtures; "Oh My".   It is always interesting to see how folks decide to address plumbing issues or not address them as the case may be.  This week I was reminded over and over again how valuable a good plumber is.   Let's discuss a few of the best of the week.  Early last week I went to a bank owned property where the exiting owner decided to take everything including the kitchen sink (no pun intended here).  While I don't agree with taking all of the fixtures, cabinets, appliances, doors, carpet (seriously), there is definitely a right and wrong way to remove these things.
For example if you are going to remove the water heater or say a sink, a Saws-all is not a required or recommended tool.  The house I was in had the lines to the water heater cut off at the wall and waste piping cut in half under the sink.  These will be difficult replacements now and both could have been removed without damage.  Later in the week I visited a very nice house that had a rather distasteful smell coming out of the master bathroom/ bedroom area.  When I crawled under this area it quickly became apparent why.  Someone had removed the cap from the clean out at the end of the toilet waste line in the crawlspace and had neglected to replace it.  Yep, you guessed it. Every time the toilet was flushed it ran into the crawlspace.  It was nasty and again very avoidable.  I then went to another bank owned property and was truly impressed by the home owner repairs to the plumbing system seen there.  There were several including patching the main bathtub with Super Glue, but my favorite was the master shower repair.   It seems that the valve set for the master shower was damaged and would no longer shut off completely.  I would guess that this was a constant annoyance as well as a waste of water.  Instead of repairing the valve set, the owner added a shut off valve between the shower head and the pipe coming out of the wall.  Ingenious!

I guess my point is that time, effort and money were most certainly spent on all of these cases and money of each will have to be spent now to un-fix and re-fix all of them.  If you have to make plumbing repairs, do some research, ask for the proper pieces and tools and take the time to do it right the first time.  It will save you time, money and save you a lot of frustration in the long run.  If you are uncomfortable making these repairs don't be afraid to call a licensed plumber.  These guys can get the job done right the first time, aren't that expensive and will do all the crawling around in the yuck for you.  While we are on the subject of plumbing, it is cold out there this morning and according to the powers that be at the meteorological center it is going to be a cold winter.  Now would be the time to make sure that all of the supply pipes under the house are insulated and the hose bibs are either shut off or insulated as well.  Nothing spells disaster like a burst pipe.  Last winter really wasn't that cold but I have been through bank owned property after bank owned property that is full of leaks.  My record this year is fourteen leaks.  Yes you read that right, fourteen leaks in one house.  It looked like Swiss cheese inside by the time there were done fixing them.   Well, have a great week all and keep smiling.

You just reminded me to get my outside taps turned off and drained!!!! Thanks!!!! :)

One always need a great plumber in their network. Keep writing great posts. 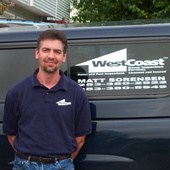