For those of you who didn't know there's been a few new SUBPRIME LENDER's in the game! That's right a few! Two to be exact!

They've been around for a long time and no one would have ever consider that SUBPRIME LENDING would ever rear it's ugly head again, but it's here.

Ever since the two mortgage giants were taken over by the federal government we've seen good attempts at resolving the past problems... with people who have no clue of what they are doing.

Example: (The government first put blame for the mortgage meltdown on mortgage brokers and originators throughout the country for offering higher interest rates and closing costs to borrowers with slow or no credit.) These programs were mostly provided to borrowers who's credit scores where below 600. There focus on this as being the ultimate problem could not have been further from the truth. (In some cases this was true but not as a majority)

1.In the governments first attempt to resolve matters they created HVCC where appraisers could no longer receive appraisal directly from lenders or brokers, they all would now have to be placed through an approved Appraisal Management Company. Although this process was created to eliminate any appraisal influence to an appraiser it has now helped protect the appraisers but at the same time has caused appraisers to be more conservative on estimating values than ever before. Although most appraisers do a good job there are others that are very conservative on their opinions and have caused many borrowers from qualifying for the low interest rates that are available today. And for the sellers, who've listed their homes with professional real estate agents who perform a true Comparative Market Analysis (CMA)prior to taking on any new listing that they are going to spend money on to advertise, just to find that they can't sell to the home because the appraisal did not come in at the contracted sales price agreement. Little do these sellers know that in the event that an FHA insured mortgage is denied for any reason it is place and identified within FHA Connections and any new buyer needing an FHA insured loan will be denied for the same reason because it will be identified in the system for a six month period. This is not fair to the sellers! Weren't we told that value was determined by what someone was selling something for and what someone was willing to pay for it?

2. National Mortgage Licensing System (NMLS)- This was created to keep the criminals out of the industry and to provide a systematic way for states to communicate through a centralized system to reduce mortgage and housing fraud. Some states continue to do their own thing playing along with what the government has created and which the government highly recommended that they participate with. Again, it's the governments attempt to do the right thing, but the problem which has occurred is bigger than the problem solved. See although this process is now extremely difficult to get mortgage licensing approval, it has drastically reduced the number of lenders, brokers and loan originators through out the country. There are some estimates that in Florida alone 3 years ago that there were over 40,000 loan originators and now with the new licensing system there are less than 5000. We are extremely happy about this as less competition means more business.. but for the consumer, that's right, it also means that they will eventually pay more for doing a loan. As an example we've already seen the average cost of appraisal go from $200 to $450... to cover the additional costs in section 1 above.

3.) Increased Credit Scores- Minimum credit scores have increased from 580 to 640 over the past 18 month period. What many people don't realize is that unless thier creditscore is above 760 they stand a chance of having to pay higher fees. Although these extra fees may not be high enough to be considered SubPrime by definition, the amounts borrowers may end up paying over the life of the loan can total up to be thousands. The other thing that many people don't realize is that many lenders not only have a minimum credit score they also must meet a minimum number of existing loans and credit cards that have been established for more than 24 months. Lenders across the country have been adding additional over lay underwriting guidelines to loans that they feel may be not quite what they like. Now although a borrower may receive an automated approval finding report from DO or LP (The national automated underwriting modules provided by Fannie Mae & Freddie Mac) if the loan does not have other credit standards it will be denied. The way banks avoid discrimination is they make it a formal policy. It would be discrimination if they provided a loan to one borrower and didn't to another with the same credit score and trade lines opened. The additional credit overlays have been put in place by these lenders for one reason and one reason only... THE GOVERNMENT...

Who owns Fannie Mae & Freddie Mac right now is THE GOVERNMENT! Most loans provided in the United States today is either Fannie Mae, Freddie Mac or have at least have an FHA or VA guarantee which means the government has the say in the end. So when many lenders have been writing loans, packaging them to underwriting standards provided by the GOVERNMENT and then the loan does not get purchased by the GOVERNMENT (Fannie Mae Or Freddie Mac) then the lender must hold onto this loan or sell it at a discount as a scratch and dent loan even though it got approved through their automated underwriting system. We can't blame the lenders as they are being careful not to give a mortgage that will not be accepted by the government.

But, here is the kicker... early in 2010 Fannie Mae & Freddie Mac put in place credit score and loan to value pricing adjustments. These are additional points that must be charged to the borrower when their credit score and loan to values come in under 740 credit score. These additional fees can be up to 3 points extra to a borrower. Who must collect these fees on behalf of the GOVERNMENT are the same lenders, brokers and loan originators who where blasts and criticized for the mortgage and housing meltdown. If a borrower doesn't have the additional fees then they could get them down to zero by paying an additional .50 or 1 % more in interest on the mortgage. These extra finance charges can total literally thousands of dollars over the life of the loan. This is important to know when working with borrowers as to help them increase their scores way before thinking of purchasing a home. We specialize in supporting these clients and then handing them back to our affiliated or referring Realtor partner.....

Why this is even more important than ever is that they have just been increased again effective today. That's right, on average, each fee has increased either .25 to .50 in total fees on top of the already existing price add on's by Fannie Mae and Freddie Mac. And we don't expect them to get lower any time sooner but rather higher in the months to come...

The point is help your borrowers better prepare for tomorrow as the GAME has changed more than anyone could have ever imagined. And although the government is really trying to help, it is obvious that they have allot to learn.

Best regards for a happy, healthly and prosperous new year!

RonGiannamore is a Senior Loan Manager for Mortgage Services, Inc. for the past 23 years. 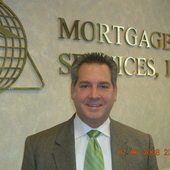