Wordless Wednesday - photo taken New Year's Eve Night in Orlando, Universal Studio's City Walk Party, where Bret Michael performed. He is also well known as the Celebrity Apprentice in 2010. I call this "wordless" since I was totally speechless to be right there with this superstar, who remained after the concert to meet with my husband and I, around 1:30 am - since we purchased 2 of his guitars and a cymbal. He personalized all 3 of them, while standing outside his tour bus that was ready to leave. I really thought we would be rushed in and out, but Bret was so kind, very soft spoken and nice - asked what exactly did we want him to write on them - and followed through. Again, I was speechless. Very much in shock he would even take time to do this and meet with us. It started my New Year's Off in a special way, for sure! Then to have one of his band members notice that my husband had a camera around his neck, and offered to take a photo - that was awesome! Here is my Wordless Wednesday Photo. That photo is awesome.  I'm a fan, ever since he was on the Apprentice.

Well I love Bret's eyes..very sexy...and how sweet of him to autograph your purchases.

Thanks Susan - Bret is doing so much for charity these days too - especially for diabetics & research. I'm still amazed he took time to meet with us. He didn't have to. Plus it was New Year's Eve and I am sure he and his crew were ready to call it a night!

I agree Rebecca - Bret is quite handsome, which is probably why my husband got in the center - but Bret shook my hand and gave me a hug afterwards, too. That turned me into a Bret Michael Grouple, ha ha. I'm kidding - I'm just a fan. And telling others just how nice he was.

Carla, love this photo, how great your New Years Eve was, full of surprises!

How is it that you can get such a good picture in such a wild place.  Great evening I bet.

Thanks Ellen - and you are right, it was full of surprises that night for sure. My husband is a lover of guitars and it was announced that there would be an auction after the performance for some of the items. The Bret Michael's merchandise proceeds go to the diabetes charity he gifts to. We thought that was a worthy cause since my husband & his sister both have diabetes. So...off we went. Then we found out that the guitars were not part of the auction, they had set price tags. John bought 2 of them, plus the cymbal for our collection. We tried to get back stage passes earlier, but they were sold out. The neat part is, I'm glad we DIDN'T get those back stage passes, since we had Bret and his band, along with a few crew members to ourselves. Very private. Probably a once in a lifetime for me, ha ha.

Shelton, this was a quiet spot, way deep backstage where the tour bus pulls in. Hardly anyone there... just Bret. his band members, a few more of his crew. They were getting ready to pull out, but stayed behind so our guitars and cymbal could get personalized. It was almost 2 am. I could not believe he stayed to do this for us.

I don't think I've ever notice how long Bret's right arm is to reach around the both of you.

You are so funny Lee! That's my husband's arm around me - John stayed right inbetween Bret and I - it was okay because I got my hug and hand shake afterwards, ha ha. 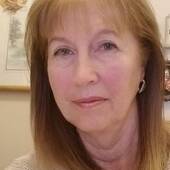